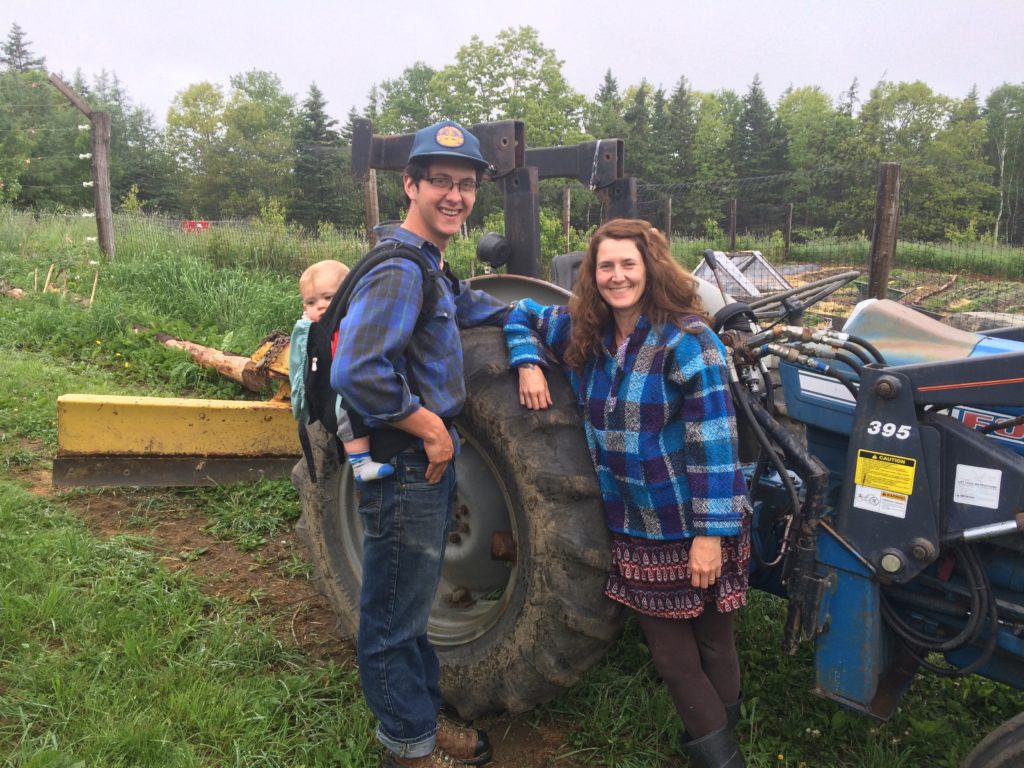 Tyler Dunning
was born and raised in Montana and developed a feral curiosity at a young age. This disposition has led him around the world, to nearly all of the US national parks. He is currently working on a memoir entitled How We Reach for the Sun: A Field Guide to Losing Your Friends.
Share
As if already aged – looking a victim of Millennial culture, not a product of it – Stephen answers the phone: Hello? Hello? On our way back now. Hello? Yes, Walter’s asleep. On our way back. Hello? Call must of dropped. Hello?—
He turns to me, riding shotgun, believing the situation with his wife unclear: Call must of dropped, he repeats.Stephen is twenty-four, still younger than I was when we first met six years ago, and, yet, he looks unchanged: ‘City of Windsor Centennial’ baseball cap, sun-faded flannel rolled at the sleeves, denim jeans adequate for a coalmine, industrial work boots (as I’ve borrowed his calf-high rubber counterparts), and a peach V-neck (the fashion remnants of our time spent in Southern California together). He still smiles like it’s an invitation to squeeze his cheeks. Or like he’s withholding a sneeze. The only discernible difference is the dreads – they’re gone, coming off when the brain tumour came out. Now, threat free, there is still partial blindness in his periphery.

Stephen, a hardy man in a young body.

I travelled here alone, to eastern Canada, to recalibrate. I’ve been thinking about giving up writing, getting a ‘real’ job. An ‘adult’ job. Because this isn’t cutting it, the way I purge myself onto paper in an attempt to feel known. And loved. And important. I’m worried about the long-term consequence: What if nothing changes? What if nothing pays off? What if I still feel hollow with success?

I’m on the East Coast because I just spent a near-two-thousand dollars to attend an environmental writers’ conference in Vermont. Facilitators told me, by attending, I was showing a commitment to my craft, a willingness to make the extra sacrifice. Internally I smiled, knowing I’d successfully networked, but winced for all those I’ve met that will never be afforded the same luxury or privilege. Writing is expensive – in terms of time, finance, and spirit.

Friends and family are surprised when I tell them I attended, knowing me a thirty-two-year-old with an embarrassing bank account, but I’ve been living in the back of a makeshift furniture store, rent free, for the last three years to ensure the opportunities: conferences, workshops, retreats; submitting to journals; paying for freelance editing. I consciously made this decision, leaving San Diego for rural Montana, to create the time and space required to be a writer, to learn the industry, to alleviate the financial burden of California and separate myself from the big-city amenities. To focus.

I thought I’d have a book done in a year. Then in two. Then three. By year four, however, the manuscript was complete, with me then learning that writing is the easy part. Selling the damn thing is the difficulty. Editing and restructuring became new forms of mental affliction unto themselves. Agents and editors, new demigods to my worship. To have one of them say ‘Yes’ would’ve been the equivalent of an accepted marriage proposal. All the while I wasn’t even comfortable claiming the title ‘writer’. I’d started forgetting what I was altogether.

These thoughts, of course, are recurring, and common to creatives, but they’ve gotten worse: the further I advance in the literary business the more hopeless I evolve, each small victory adding up to one grand failure. Stephen, unbeknownst to him, has become my port in the storm.

He drives me around the South Shore of Nova Scotia. Nine-month-old Walter, as said, is asleep in the back. Stephen’s wife, Laura, and her two kids, Stella and Oliver, are back at the house in Petite Riviere, a small village named for the waterway that runs through it. There is a dog too, a beagle mix, Chebucto, named after the Halifax Harbor, cute as can be.

Route 331 takes us to Crescent Beach, where locals harvest the nutrient-rich seaweed for gardening, then through LaHave, passing a den of foxes awaiting the low tide for hunting, and around Conquerall Mills. I see coffee shops I’d like to visit, perhaps sit and write at, but negative thoughts have overtaken me. I won’t be returning.

A backroad leads us – through softwood forest and muddy hillsides, inhabited by feral pigs – to Stephen’s sister’s school bus. She lives there, Supertramp style, after the defunct vehicle, towed from Halifax, became her home atop a tick-infested thirty acres – ‘Blueberry Hill’, as she calls it. And the namesake is everywhere, painting the landscape an Alaskan taiga. Fall colours in spring. 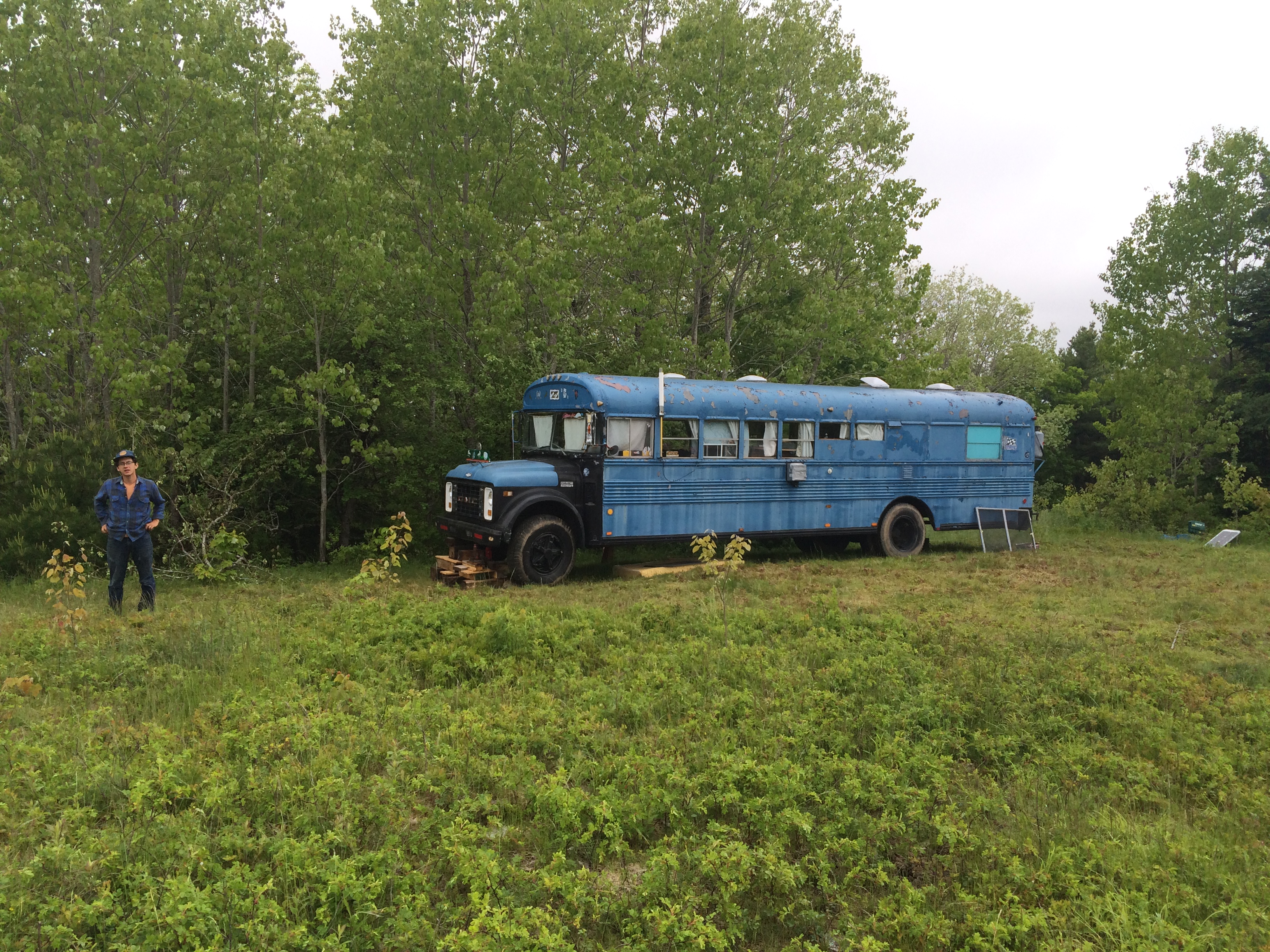 Up the road is a commune. I first meet Sam and Emily, building a cabin on the forest’s edge; we approach the skeletal framing via a solar-powered electric fence containing piglets, ducks, and cows. Cameron, another local, is up the way, in an attic, playing a hang drum; Jake is selling raw milk, hobbling it out to a customer’s truck; Melissa, laundry; their kids, climbing what seems to be a wigwam made of a Papasan chair. Jordy is refurbishing a counter; Lisa, tending the garden; everyone, seemingly, in their thirties or younger.

Stephen shows me his land next – just shy of nine acres – with Walter awake and now strapped to his back. Roughly half the acreage is cleared back for the farm; the rest, forest. An old oxen trail marks the delineation.

My guide navigates with ease, even with a child in tow and acquiescing his better boots to me, as I fumble and fall over rotting logs and adventitious boulders. Those, Stephen says, are ‘erratics’, boulders once carried by glacial ice. Farmers break them up by boring holes into them in the fall and then waiting till spring for the winter to fill the openings and break them apart.

Three seasons to remove a single boulder. Damn, I think.

The farmland is similar – a multi-year commitment. Stephen shows me expanses of earth where he’s planted buckwheat to draw nitrogen into the soil and smoother out weeds. Two years, he says, before it’ll be ready to cultivate. The orchard (apple, pear, peach, Asian pear, cherry, and plum): six years till fruit. The sapling nursery: two years before revenue. Also, there is to be an eight-foot fence around the perimeter to keep out deer – another year investment. Then there is the new barn, the apiary, the dry cellar, and a guest house to be used as an Airbnb. Two years before the farm is even profitable, Stephen says.

More conjecture, later, gets thrown around the dinner table, often in various mock-maritime accents. Friends and family are speaking of all their developmental plans, and sustainability goals, and food security. I can’t help but ponder the conundrum: most young people don’t talk this way, don’t think this way. Most young people don’t make multi-year commitments without guaranteed compensation on the horizon. I think of instant gratification. Of consumerism. Of Amazon Prime. I think of all the plaque inundating our cultural bandwidth. It’s refreshing to see young adults turning back to heritage practices, to an ancient commonplace that is now the avant-garde.

I look to the land: these things take time and energy. The trees, crops, livestock, infrastructure. And, for now, this isn’t glamorous or profitable. But it’s assured commitment, even with all the risk. Writing too, I’m reminded, is a cultivation of the cerebral landscape, never an act rewarded by cutting corners, expediting execution, or accepting shoddy craftsmanship. Literature and land-use both require the confidence of boring a hole in a boulder – and waiting. Both require letting a field sit fallow to become nutrient rich; or trusting an orchard for a near-half decade to blossom with abundant fruit. It requires returning to the labour, day after day after day, in the rain and snow and hail storms that take place both externally and internally. It’s knowing you will never be fully applauded for your sacrifice or rewarded for it, but putting in the hours knowing that such commitment must be fertilised and then grown and germinated through budding, flowering, going back to seed – then starting all over again.

I don’t know who will turn a profit first, Stephen or I, but we’ll both keep putting in the labour. It’s what we do, bounty or not. Is he a farmer? Of course. Am I a writer? – I don’t know why that answer comes with more difficulty. But I look to the land, to my generation with its multi-year commitments: development, sustainability, security. To their faith in place.

I have faith, too. I am a writer. And I keep farming.

Tyler Dunning’s quest quest to visit every US national park after the death of his friend Nate Henn is the subject of a film, A Field Guide to Losing Your Friends.

“Nate Henn was full of humour, generosity and spirit. He was so alive. But then, in 2010, a series of terror-related bombings devastated Kampala, Uganda, leaving 74 people dead, including Henn. The news was a devastating blow for his best friend Tyler Dunning, who plunged into darkness, grief, anger and self-medication. His only solace? Exploring Rocky Mountain National Park, where the cliff faces, pine forests and wildlife softened his raw emotions. It was a failed attempt to climb Longs Peak that really changed him: the humbling experience sent him on a quest to visit all 59 US national parks. From Glacier to Bryce, Saguaro to Kenai, the Everglades to Yellowstone, he roamed. And through the adventures that unfolded, he pieced his life back together. He started to let others in. And, finally, he was able to say goodbye.”

You can watch the film trailer here.