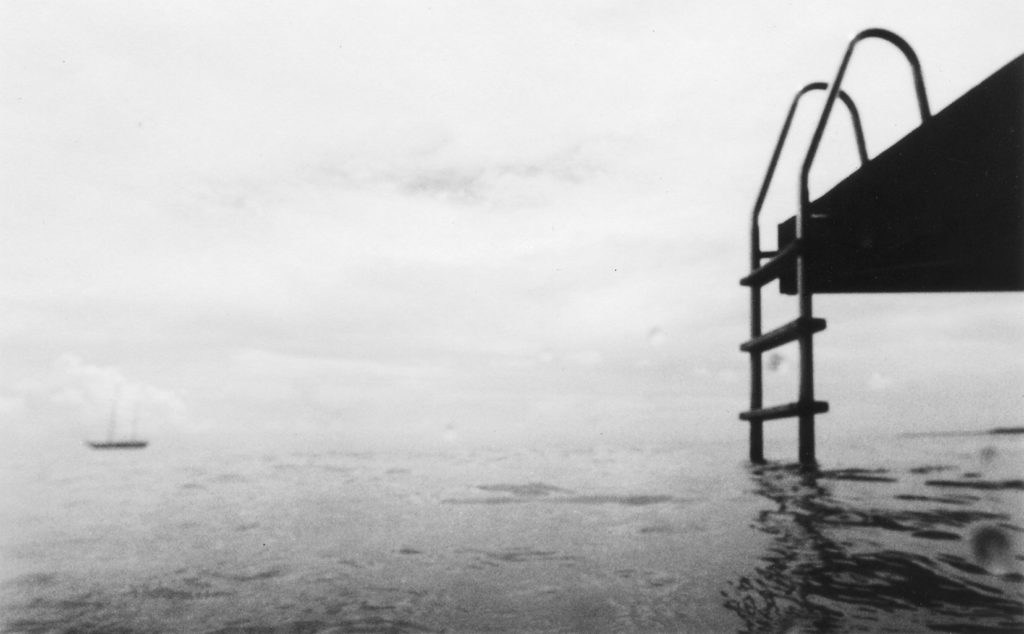 Ladder and Boat by Robin V. Robinson
Natalie Young and Mark Rutter
Natalie Young is a founding editor for Sugar House Review and has been published widely. Mark Rutter has published three books of poems, most recently Basho In Acadia (Flarestack Poets).
Share

Attempting to Explain State History to the Alien

‘… the white gulls upon the black crickets, like hosts of heaven and hell contending,  until the pests were vanquished and the people were saved.’
– Orson F. Whitney, Mormon Settler and Apostle

A piece of the truth lies
in the bird’s real name: California gull.

Early settlers almost starved because of a cricket
invasion, insects as big as a man’s thumb.

who filled the air with white wings and cries,
settled on the fields, feasted and became

Utah’s state bird. Oral history is muddled –
Sunday school taught her and she tells the alien

how seagulls saved the pioneers’
crops from grasshoppers. Google clarifies

and confuses with more truth, claiming
the Mormon cricket was likely a shieldback katydid,

changing colour in mob situations, swarming
fields in a cloak of black.

Whatever the true labels, the bugs came and ate
corn and wheat, squashes and melon.

And no matter if they came for God
or the salt lakes, legions of birds

gorged themselves and saved a people’s

right to name a miracle.

Persecution is not uncommon in this state
or its people: Mormons, polygamists.

And though the alien has second thoughts
about extermination, he’s started

spraying unstoppable weeds
in the yard. The poison streams

out, accidentally hitting
adult grasshopper here, a baby there.

Camouflaged so perfectly
it’s always too late to retreat.

The alien takes concern
to the neighbour in a large sunhat. Don’t worry

they’re asking for it.

The sun is directly overhead and he can hear
a cricket chirping.

Is the insect in trouble or confused
about what is appropriate,

what we do and do not do in the daylight?

The Mormons reached the American West in 1847 and settled in Utah following violent conflicts and religious discrimination in Illinois and Missouri (partially due to their practicing polygamy). The ‘Miracle of the Gulls‘ occurred in 1848, when a flock of seagulls flew into the Salt Lake Valley and ate hoards of insects that were demolishing the crops, thus saving the Mormons from starvation. In 1857 at Mountain Meadows in southern Utah, the Baker-Fancher emigrant wagon train was attacked by a militia of Mormon settlers; 120–140 people were killed, mostly families on their way to California. The US Army attacked a Shoshone camp at the Bear River in 1863, after years of clashes and raids on farms in northern Utah and bordering state territories – at least 240 Shoshone men, women and children were killed.

Images:
Robin V. Robinson
Ladder and Boat
Life Saver
Unique gelatin silver prints from film using alternative photographic processes involving copper bleach and lith developer
The Surfacing series explores the unease one feels on the water and in life, on the edge between what is known above and unknown below, perhaps between the past and the future. The feelings that arise from these images remind me of the liminal state that we find ourselves in – swimming in a sea of uncertainty with man-made objects of perceived safety.

Robin V. Robinson is a fifth generation central coast Californian who considers herself a visual poet, inspired by nature and psychology. Her work focuses on how we experience the planet and ourselves, providing perspective on this unique moment on Earth. Based in Carmel, she was trained in the local West Coast photographic darkroom tradition, which she continues despite digital forces. Robinson’s work has earned international awards and is included in museum collections. robinrobinson.com

Mark Rutter has published three books of poems, most recently Basho In Acadia (Flarestack Poets). He lived on the coast of Maine from 1990–2002, and returns there every summer. Mark is also a painter and book artist, and examples of his work can be seen at the-art-barn.com

Natalie Young is a founding editor for Sugar House Review. By day, she works as an art director. Publications include Green Mountains Review, Tampa Review, Rattle, South Dakota Review, Los Angeles Times and others. Natalie is left-handed, half Puerto Rican, and a fan of Dolly Parton and Brussels sprouts.