Skip to content
Dougald Hine
is co-author of the Dark Mountain manifesto and was at the core of the project for a decade. Originally from the northeast of England, he now lives in central Sweden. He co-hosts The Great Humbling podcast and is slowly creating a school called HOME.
Share 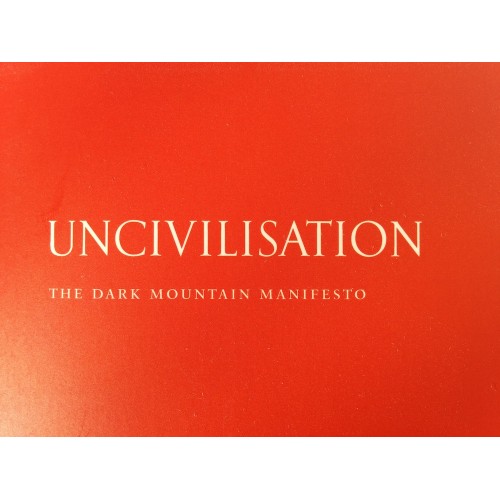 It’s early in the morning and, in between the tasks that get the day started, I have been reading snatches of the news from Greece. Hopeful news, for once, though who can say how much of that hope will survive the collision with financial and political institutions that must follow? We’ll take whatever snatches of hope we can, these days.

The reading sets me thinking back, six years now, to the time when we were writing the Dark Mountain manifesto, the new edition of which is published today. The text came together over a period of six months between the summer of 2008 and the early weeks of 2009. It was the autumn Lehman Bros went under: the panic of powerful men was visible on the TV screens, even as they continued to insist that all of this was under control.

If the manifesto travelled further than Paul or I could have guessed when we wrote it, one reason is that it has helped people find their bearings in a world where the ongoing crisis is no longer a far-off consequence of systems in which we participate, but a visible unravelling of those systems that comes close to most of our homes. The crisis through which we are living – economic, social, political, ecological – plays out on a timescale that intersects only intermittently with the attention span of the news industry, the statistical representation of the economic cycle, or the day-to-day rhythms of getting on with life. People look for larger frames within which they might be able to make sense of what they see around them. This manifesto has offered one such frame.

It is not a political manifesto, a plan of action, a platform for government or for revolution. In the early days, when we were still working out how to explain what we were doing, someone asked me if Dark Mountain was a political project. ‘I think there may be times when it is necessary to withdraw from today’s politics,’ I wrote, ‘in order to do the thinking that could make it possible for there to be a politics the day after tomorrow.’ Not that any of us can sustain the detachment this suggests, not consistently. None of us spend all our time up on the mountain, but the perspective we get there may change what we do when we return to today’s tasks.

The manifesto was not a definitive statement, but a first attempt to articulate the perspective we had begun to find. What did that consist of? Here are some of the elements that I recognise now, as I reread it.

A sense of the precariousness of most of what we have grown up taking for granted. (Who is the “we”, here? The manifesto was written by two white men, both English, both ex-journalists, Oxford graduates, bookish and middle class. It continues to amaze me how many people with lives quite different to ours have recognised something of their own experience in what we wrote.)

A sense of the depth of the mess – social, economic, political, ecological – in which we find ourselves. (Here the “we” is broader.) Also, a sense that there is something powerful about naming this and looking hard at it, rather than trying to avoid it, or rushing immediately to the language of solutions, answers and action.

A suggestion that the depth of the mess in which we find ourselves has been obscured by the stories that we have been telling ourselves – about history, about the world and our place within it – and that these stories have played a greater role than is often acknowledged in how we got into this mess. The manifesto names two of these, in particular: the myth of progress and the myth of human separation from nature.

Another suggestion – that the power of myths cuts both ways. That humans live by stories, that the idea that we outgrew the need for myths is itself a myth, more dangerous for not knowing itself to be one. In this light, the problem with the myth of progress or the myth of human separation is not that they are myths, but that they are bad myths, or at least myths that are badly out of joint with the situation in which we find ourselves. They are maps that probably never fitted the territory as well as we thought, but that have now become actively dangerous.

Out of this grows a project, sketched only loosely in the manifesto, but based on the suggestion that culture has a role to play in this mess in which we find ourselves – a role that goes beyond the invitation to help get the message out, to enlist as a sophisticated extension of the communications department of campaigning organisations. How good or bad a job we make of living through the times ahead will have a lot to do with whether we find other myths by which to steer. These are unlikely to be found by any systematic process, but they are likely to come from the margins, from those who are already living with one foot in the unknown world ahead and from those who have kept alive the supposedly obsolete.

That is one route through the manifesto, not the only one that can be taken. To summarise it in this way is to be reminded that there is much here that had been said before, in other contexts. Even as we wrote, others were arriving at similar thoughts from different directions. What we did was to assemble it as it looked from where stood, during those months as 2008 rolled into 2009.

It is not common for a self-published twenty-page manifesto to be given a two-page lead review in the New Statesman, and rarer still for it to start a movement which the New York Times can introduce to its readers as “changing the environmental debate in Britain and the rest of Europe.” These are two of the more official markers of what happened next. The reactions were so intense and so contrasting that it feels now as though the lines of argument running through it are also the contours of a dark shape, an inkblot shape in which readers find reflections of their own fears and hopes.

The text of the manifesto has always been available on our website, but last year we sold out of the fourth edition of the hand-stitched pamphlet in which it was originally published. After some discussion with our friends at Bracketpress, we decided that rather than wear out their hands with a larger print run, it was time to republish it as a paperback. This also allowed room for a new essay, introducing the manifesto and reflecting on the process by which it came about.

Six years have passed, six years further into this unfinished crisis. If you were to ask either of us now whether we stand by what we wrote, what would be our answer? As I put it at the end of the new introduction:

We stand by it, not as a stockade to be defended, but as a first attempt to say something, to work out how to say something, the fuller significance of which we are still discovering in the company of a growing gang of friends and collaborators, most of whom would never have met if we hadn’t been brave enough, or foolish enough, to commit these words to print.

The new paperback edition of the Dark Mountain manifesto is available here.