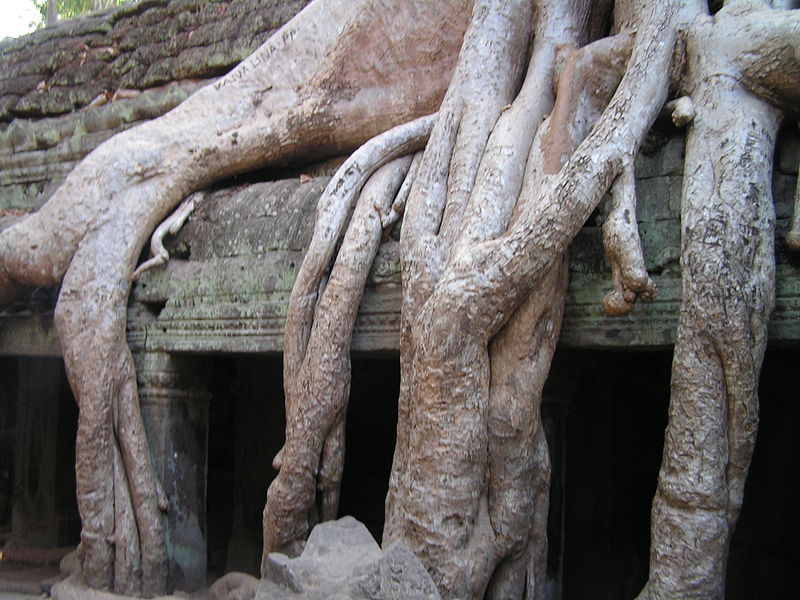 'Tree roots, Angkor Wat' by David Wilmott/ Wikimedia Commons
Boyd Collins
spent some of his earlier years as a Cistercian monk at the Abbey of the Genesee in upstate New York. In later years, he became a peace activist and produced  the Nonviolent Jesus blog. Currently, he lives in Texas in the United States where he is becoming active in the Transition movement.
Share
Having read and admired Keith Farnish’s first book, Time’s Up!, I played with the hope that his new book, Underminers: A Guide to Subverting the Machine, would be a fulfilment of the promise of that book. In Time’s Up!, his orchestration of the natural world from one ten-millionth of a metre to organisms the size of planets and beyond filled me with an awe at life that I had not felt since my early forays into science fiction, when I contemplated life forms whose alien shell guarded beauty that had once been present during childhood romps through the woods.

In the new book, this celebration of the miracle of life and rage at its desecration would be transformed into effective tools of resistance. Having unsuccessfully sought the sacred sense of life in the pious abstractions of the environmental movement, whose primary goal was so obviously to preserve the comforts of civilisation with a splash of floral colour, I was tired of imaginary battles that always ended in noble defeat. It had long seemed to me that the same sense of purpose as the French Resistance, the same willingness to endure the necessary pain while maintaining unwavering attention to detail, and a readiness to give up one’s life for the cause, was exactly what was called for if we were to stop the manmade extinction of life on earth. The following is a brief attempt to understand his concept of civilisation and the power it has to lock us into a life that is not our own.

The definition of civilisation according to Mr. Farnish is disconnection. But while he ably defines the means of disconnection, he is less clear in this book concerning what we, the civilised, are disconnected from. Obviously, our Mother reaches out to us, her tendrils constantly seeking to repair her lost connections with us. But if we are to dedicate our lives to the destruction of industrial civilisation, we had better have an unshakeable sense of what we are struggling toward, not merely against. Where does the spirit flow when the tools of disconnection are disconnected?

Most of the book focuses on techniques to break our connection to civilisation, but he assumes a concept of civilisation which looms in the background like a dark emperor who never reveals his face. We need to shine a light on that face.

The justification for civilisation is that it promotes all that is best in humanity: its moral standards, its spiritual aspirations, its love of knowledge, its disinterested science and technological prowess that sheds abundance so freely. The alternatives are invariably portrayed as violent, superstitious, closed to rationality, progress, and enlightened human behaviour. Like a swan, the word ‘civilised’ leaves a wake of aspirations and expectations which are as powerful as they are mysterious. It carries the aura of whatever is decent, upright, refined and forward-thinking. It embodies everything that one who cares about his fellow human beings values. To question this is to question the very foundation of our lives.

‘Civilised’ — what lies encased within this word? How can we break it open? I’m not interested in linguistic analysis, but the morphic resonance which this word emits. What is the nature of that resonant field it creates in our minds when it is spoken? I sense two parts in it: one is a sense of goodness and order with an aura of progress and a sense of comfort. That comfort is the seductive element because it implies that we need this comfort in order to be good. It tells us we need freedom from the constant battle for survival in order to break through to a new realm in which progress becomes possible. This progress constitutes the foundation for further comfort and thus further goodness. The freedom from material want opens the door to promises of creative revelations and a life of beauty, freedom and wealth.

The other key element in the word is a deep moral aspiration. To be civilised means to respect the bounds of the other. It carries within it a sense of right order in human relations. In the Christian sense, it overflows into love for all humanity and its salvific destiny. In its secular meaning, it invokes human rights and the democratic ideal. But it makes the realization of these ideals contingent on the flourishing of a system that provides its material foundation. And that is where the distinction between its root meanings must be located. This is the core of the word’s power. It draws on our basic sense of meaning in human existence. What is it that gives us a sense of meaning and purpose? It is the striving for an ideal of contentment, beauty, stability and livingness that fulfils the roots our being.

Such is the bait. But the realization of this promise is contingent on the fulfilment of certain duties. Those duties include obedience to the system’s legal foundation, submission to the authorities who maintain and enforce that structure, and shouldering the burdens of building and maintaining the material groundwork upon which civilisation rests. In the modern capitalist version of the story, corporations form the central pillars of the civilised hierarchy. Submission to the interests of these pillars is fundamental to enjoying its benefits.

Before we can undermine the tools of disconnection, we must first understand what it is we are undermining and how deep the psychological, physiological and spiritual roots of the phenomena are. Progress is the guiding principle on both the left and the right. What is the purpose of human life? Civilisation answers, ‘It is to become ever more intelligent, rational, creative, and spiritually evolved.’ What is the method? It is to build an extensive material foundation that provides the comfort and wellbeing that makes a truly human life possible.

As Mr. Farnish indicates, I believe that we should draw a dividing line between these two factors: the promise of human fulfilment and the means to its achievement. What the word ‘civilised’ embodies is the advertising paradigm: give them a shining vision of what their life could be, then make them work to enrich your company while returning them nothing but a cheap substitute for life. Then make them believe that the thrill they experience in the brand is the thrill of life bonding them to the greater human community.

The elements of the deception are as extensive as the infrastructure of modern civilisation and must be constantly rotated in order to maintain the illusion of novelty, but the essential program never alters. These shadows of fulfilment which we chase into the night constitute the essence of our false life, while our true life lies weeping behind us, somewhere lost in the desert.

But there is something else that must not be undermined, which grows stronger in us when we disconnect: good, moral behaviour is how Mr. Farnish refers to it at the point where he defines civilisation. Yet I feel that ‘good, moral behaviour’ symbolises an array of extra-civilisational realities that are hinted at rather than celebrated. He references them in the distinction he makes between the legal and the lawful: ‘On the other hand, I do give a fig and more about whether something is lawful or not. Humanity has, whether formally or not, passed down something called Common Law, which consists of the basic rules that should be observed in a just society under all but the most extreme conditions. For instance, under Common Law it is wrong to intentionally kill or harm someone without their consent; it is wrong to take something that rightfully belongs to someone else; it is wrong to impinge upon someone’s basic human rights of clean air, fresh water, food, warmth, shelter, companionship, liberty and other things related to human dignity. Actually there are surprisingly few things that could be considered to comprise Common Law, which is significant, because anything more specific would imply a particular culture being imposed upon an individual or collection of people.’ This invocation of Common Law speaks to an older concept of law which corresponds to the fundamental rights and obligations of communities and the individuals that make up those communities.

The word ‘civilisation’ attempts to confiscate the source of morality, but moral behaviour happily overflows the bounds of legal obedience. Those who rule would have us believe that moral boundaries coincide with the demands of civilisation, that the obedience of right reason is obedience to the state and its corporate masters. But Common Law suggests another spring of morality and by that standard civilisation fails.

But something is missing in this analysis. We know what it is to be disconnected. Daily we experience the aridity of living far from the sources of life. But what would it feel like to feel the splash of the clear water that irrigates our souls?

What is it then that fills us not merely with rage at the horrors visited on the body of our Mother, but reminds us of a hidden identity which survives from unexpected infusions which somehow continue long after despair seems final? This is the force that Mr. Farnish grasps after but never quite touches, though it lies beneath the surface of his guide to disruption like a barely suppressed shout for joy. It is the eternal sunrise we once lived within and could remember even now if only we hadn’t agreed so often that a sense of life’s greater purpose was the invariable mark of the loser.

It is the dawning realisation that our existence is not the closed circle we pretend it to be that sustains those reconnecting to their forgotten life. While our abusers threaten us with fantasies of violence and insecurity if their order is threatened, the underminers sense a greater order that lies beyond the suicidal frenzy electrolysing civilisation in its terminal decline. That order can be evoked by a phrase as simple as ‘good, moral behaviour’, but what is being unlearned is what makes that phrase seem so small. In reality, it has the power to disenchant us from the animatronics that daily seem more shrill, desperate, and tawdry as each emerging crisis swells towards its crescendo.