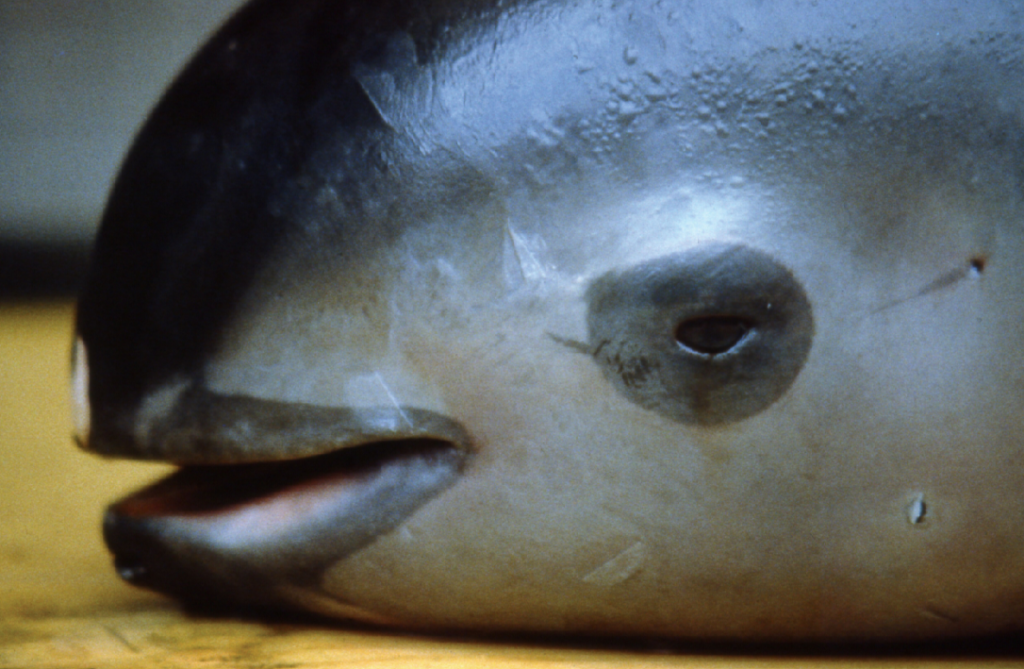 Dead vaquita. © Omar Vidal
Sean Bogle
has been working on the front lines of conservation as a biologist for over 10 years while documenting the stories behind conservation efforts around the world. His passion for wildlife and storytelling has inspired others, but it is through his collaborations with others that fuels his inspiration to help improve the health of the planet and the survival of all species.
Share
A voice on the radio said that they’d captured a vaquita. It was being brought to shore to be placed in a marine pen. With the camera rolling, I watched the boat approach and then land on the beach. Scientists frantically hoisted up a sleeveless gurney with two fins poking out of the sling. I was disoriented and distracted when I got that first glimpse. My priority was to focus on filming, but all I really wanted to do was run to the vaquita and look into its eyes. I wanted us to transcend into another realm where the vaquita would be safe.

I could not believe that a real vaquita was in front of me. The scientists scurried as fast as they could into the capture facility with me following and filming. Like a medieval bridge being cranked up across the moat, the door of the facility closed in front of us, restricting our access to the ongoing operation.

Shaken by the experience, I met with fellow filmmaker Matthew Podolsky to confirm that this really had just happened. He was also quaking with excitement and disbelief. I saw this foreboding moment as a sign of dark things to come. This feeling did not settle well with me. I feared the worst despite everyone’s veneer of optimism. I had just witnessed a crucial moment in the operation to save the most endangered marine mammal on the planet from extinction. The vaquita is a porpoise that sits as the smallest species in its family of cetaceans, with the mighty blue whale being the largest. There is no other creature that exhibits such loveliness. The vaquita wears an elegant black lip liner just skirting the edges of its mouth. Its eyes are cradled in circular black holes, giving it the nickname ‘Panda of the Sea’. This is one of the most cryptic creatures in this world, endemic to the murky waters of the most northern portion of the Upper Gulf of California, Mexico, and exhibiting extremely shy behaviour, which limits sightings and interactions. It took many years for scientists to learn what we now know today about the vaquita, but we still have much to learn. Sadly, there is very little time remaining – the extinction of the vaquita is almost a certainty.

When Matthew and I launched our documentary film project in 2015, there were an estimated 97 individuals. By the following year there were roughly 60. Now there are fewer than 30. Initially we believed that the film we were making could play a crucial role in preventing the vaquita’s extinction. We soon learned how flawed our perspective was. During our time in the Upper Gulf illegal fishing only increased, and on several occasions frustrated fishermen violently lashed out against the Mexican government in protest at the loss of livelihood due to fishing bans. The lack of government assistance has converted fishermen into poachers just so they can survive, exacerbating the vaquita’s spiral towards extinction.

Vaquitas are not hunted in their own right but end up as collateral damage, getting entangled in gillnets as bycatch and incidentally drowning. Fisherman in this region use gillnets to fish for highly sought-after blue shrimp as well as another endangered species, the totoaba. Blue shrimp are a delicacy primarily in the United States and are in high demand at a premium price. The totoaba, on the other hand, is only caught for its extremely valuable swim bladder, which have been in demand in China for decades. This organ is believed to have medicinal properties but is also consumed as a means to showcase elite social status. The totoaba was listed as an endangered species in 1975, but this hasn’t stopped the establishment of a black market that traffics illegal swim bladders into China and surrounding Asian countries. This has become a colossal enterprise. I was deeply saddened that my first sighting of a vaquita was under such traumatic circumstances. This was not enjoyable for either of us. In fact, the elevated levels of stress the creature was experiencing led to its release just a few hours later. Despite this initial setback the capture mission continued.

A local fishermen, Javier Valverde, has worked to protect the vaquita and the totoaba for years. I had interviewed him countless times over the past two years about how he was coping during the gillnet moratorium implemented by the Mexican government, interacting with him so often that we became like family. I watched his children grow up, experienced their tragedies and celebrated with them. The family have dedicated their lives to the survival of these species. It started when Javier discovered a vaquita in his gillnet while fishing for shrimp one day, and vowed to start obeying the laws designed to protect them. He and his family have collaborated with scientists on the acoustic monitoring programme by constructing and checking the equipment used in collecting echolocation data. They have also helped to remove all the ‘ghost nets’ in the area. Javier caught the first totoabas that initiated the aquaculture programme, in which his grandson now pursues his career. Of his two sons, one assists him with his conservation efforts and the other is a biologist working with local fishermen.

While sitting on his porch during one interview, I asked Javier if he had any hope for the future of the vaquita and for his community. He reluctantly said yes. How could he be so hopeful? He struggled to earn an income to provide for his family, he was threatened by totoaba poachers and feared for his family’s safety, and he wasn’t sure if the vaquita would survive. Threats came in the form of public taunting and the brandishing of guns, as Javier was removing poachers’ gillnets worth a great deal of money. It seemed to me that his world was crumbling day after day with no signs of relief. His optimism was utterly perplexing. One of the most painful truths that I’ve had to learn to accept is the near certainty that the vaquita will go extinct, and there is nothing anyone can do about it.

Weeks went by without another capture and as we neared the end of the project, there was palpable disappointment that no vaquita were in captivity yet. Then, just a few days before the effort was to be concluded, another vaquita was successfully captured. This time the adult female appeared to stabilise and accept the initial care that was provided. The morale of the scientists rose and the message of desperate hope surfaced once again. But the vaquita began to deteriorate rapidly and the scientists struggled to control her well-being. She died moments later, along with any remaining hope there might have been for the survival of her species. This reality collapses my heart. I no longer feel complete knowing that the wild creatures that I have admired my entire life are disappearing and no-one can be blamed but ourselves.

Sometimes I feel as if the vaquita summoned me in some mysterious way through a network of channels to help them. This path connected me to scientists, activists, fishermen and all those on the frontlines of vaquita conservation. It connected me to my fellow Wild Lens filmmaker, friend and collaborator Matthew Podolsky, with whom I have worked to document this story. We were fused together by our innate love for all life on this planet called home. A scientist presenting undeniable truth in order to propel human knowledge, a fishermen feeding his child, a vaquita surfacing for a breath of air, or a filmmaker believing he can create positive change, all facing their individual obstacles for a collective cause with the urgent desire to succeed and survive.

I began this journey with a sense of promise, which I now know was false hope. I ask myself why I have continued to have faith in the mirage that civilisation presents to us every day. Hope is an ideal. Hope is not real. Instead of grasping at dreams of conservation, I must come to terms with the gritty and unstable condition of our planet. My heart aches with the loss of voiceless species. Throughout this project, I have learned a great deal about myself and how to cope with such tragedy. The disaster being inflicted upon the people and wildlife of this region weighs me down, making it extremely difficult to get up and continue. However, the rare successes and the potential for future successes prevents me from absolute surrender. Our message has now shifted from raising awareness in the hope that the vaquita will survive towards trying to ensure that the extinction is not in vain, and that lessons are learned to prevent future destruction. Although I am admitting that the vaquita will most likely go extinct, I still have a flame of hope that will enable me to continue raising awareness about the issues facing our natural world. This hope does not come from outside falsehoods, but rather from within myself.  I refuse to just sit there and watch the nightmare play out. The extinction of the vaquita will be devastating not only to my current fragile state, but for all life.

Sean Bogle is the director and producer of a short documentary about the vaquita, Souls of the Vermilion Sea, and also the co-director of the forthcoming Sea of Shadows, a feature-length documentary focused on the plight of the vaquita, which will premiere at Sundance in 2019.

The Wild Lens Collective is a non-profit group of media professionals working to create a global movement that brings environmentalists together with human rights advocates to protect our planet’s future.

You can watch Souls of the Vermilion Sea here: