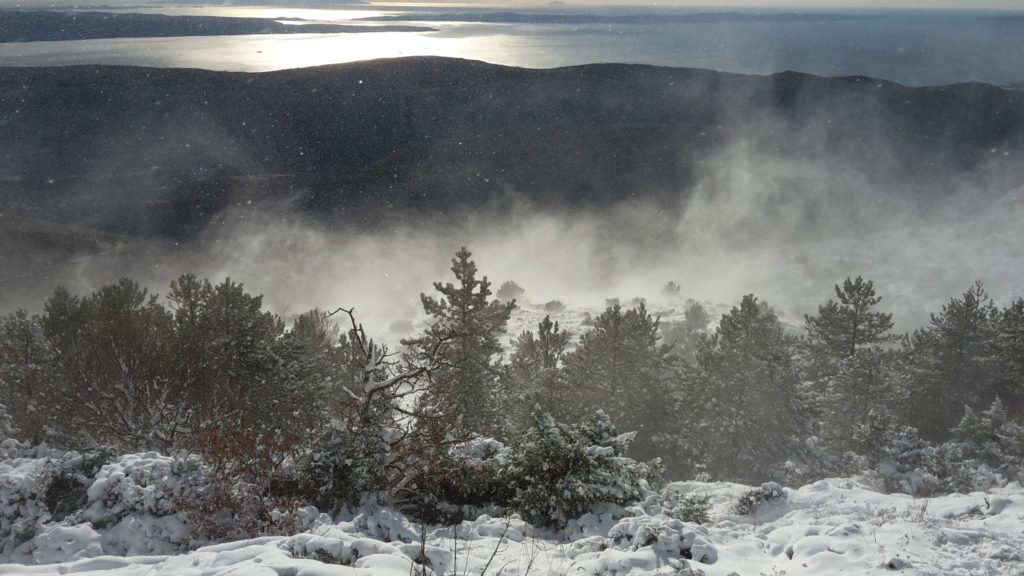 Bora wind, Mount Mosor, Croatia
Nick Hunt
Nick is the author of three books about walking and Europe, the most recent of which is Outlandish, and a work of gonzo ornithology, The Parakeeting of London. He works as an editor and co-director for the Dark Mountain Project, and has contributed short stories and essays to many of its issues.
Share
The wind almost blew me away for the first time in 1987, when the Great Storm hit the British Isles. I was six years old. It was on the mountainside of Ynys Enlli, the holy island off the coast of North Wales, where my mother took me every year to volunteer for the local trust and hear the seals sing at night. Now the storm had stranded us there, for the weekly boat was cancelled. There was no shop on the island, and food supplies were running low; one of my most vivid memories is of my mother, by the glow of a paraffin lamp, inexpertly skinning a rabbit the farmer had shot for stew. I remember hugging the cottage wall on trips to the outhouse in the yard, and my fear of slates zipping off the roof to brain me if I ventured far. But what I remember above all else is standing on the mountainside and the wind filling the coat I was wearing – many sizes too large for me – and my feet actually leaving the ground before my mother grabbed my legs and dragged me back to earth. We laughed about it afterwards. It became one of those stories. Could it have actually blown me away, across the foam-flecked Irish Sea? I’m not sure, but for years part of me secretly wished it had, and I imagined being borne through the sky to Ireland, France, America, Iceland, the Arctic Circle or any of the other wonderful places waiting in the world. I’d only travelled a foot off the ground. Nevertheless, I couldn’t help feeling slightly blessed.

Despite being moved by the wind in this way I did not grow up to be a glider pilot, a windsurfer, a paraglider or a wind turbine engineer. My attempts with kites mostly ended in dismal tangles of string. I did not become a meteorologist, one who understands weather as a science, as I’m sure this book will make only too clear. What I did become, however, was someone with an urge to travel, and especially to travel by walking, which allows you to follow paths not dictated by road or rail, paths not marked on any map, or to follow no path at all; to wander and to wonder as freely as your feet can take you. But every journey has a logic, even if it’s an invisible one. All travelling, I came to understand, is an act of following something: whether a coastline, an ancient migration, a trade route, a border or someone else’s footsteps. Scanning the travel section of a bookshop, it appeared that everything had been followed that it was possible to follow. There seemed to be no trails left that hadn’t been traversed.

And then one day I saw a map with paths I hadn’t seen before. It was a map of Europe transfigured by coloured lines, marauding arrows like troop advances that ploughed across borders, over land and sea, connecting regions and cultures that seemed quite separate in my mind: Latin with Slavic, continental with coastal, North African with southern European. These mysterious corridors had names every bit as tantalising as the Silk Road or the Camino de Santiago: the Mistral, the Tramontana, the Foehn, the Sirocco, the Bora. There was even one in the north of England, more brusquely named the Helm. The map showed the routes of local winds, which blow with tremendous force at specific times of year – normally at the transitions between seasons, such as when winter turns to spring – and, I was intrigued to discover, they were said to influence everything from architecture to psychology. The fact that these invisible powers had names, rather than simply compass directions that described where they were from, gave them a sense of majesty, even of personality. They sounded like characters I could meet. Those swooping, plunging arrows suggested routes I might follow, trails that had not been walked before. As soon as I saw that map I knew: I would follow the winds.
But where do winds come from, and where do they go? Can they be said to ‘go’ at all, in the sense that a walker goes, or a road, from one location to another? And if they can, what happens to them once they have got there?

What, in fact, is wind? Before asking that it is better to begin with a more fundamental question: what is air? Ashamed as I am to admit it, until I started this book I assumed – as I suspect many people do – that air isn’t really anything, that it doesn’t exist in the same way that earth or water does. I thought of it as an absence, a nothing waiting to be filled with something, so it was a revelation to learn that air is something in its own right.

Air is a gas, or a mixture of gases: mostly nitrogen and oxygen, with tiny amounts of carbon dioxide, argon and water vapour. Like every gas it is made of molecules, which are made of atoms. So air not only has substance, but weight – that was my next revelation – and the proper term for the weight of the air, its billions of molecules combined, is ‘atmospheric pressure’. Just as pressure at the bottom of the ocean is greater than at its surface, because of the volume of water above, atmospheric pressure is higher at low altitudes – because there is more weight pressing down – and lower at high altitudes, where the weight pressing down is less. Pressure is dependent on temperature: when the weather is warm air rises, creating areas of low pressure, and when the weather is cool it descends, with the opposite effect. When neighbouring ‘parcels’ of air find themselves at different pressures the atmosphere must equalise, so air is forced from high pressure areas to low pressure areas to balance things out. It is sucked rather than blown: that was my third revelation.

That is our culture’s answer, at least. Other cultures have answered differently, providing tales as twisting and varied as the winds themselves. The ancient Greeks gave wind its place at the very beginning of time: when the goddess Eurynome, mother of all things, emerged naked out of Chaos and separated the sea from the sky, her dancing set the air in motion and created the north wind, which became the serpent Ophion (appearing in a later incarnation as the god Boreas). Eurynome coupled with this flowing, sinuous snake of wind and afterwards, in the form of a dove, laid the universal egg from which all life hatched.

Wind and life: the two are connected at the deepest level of language. The words for ‘wind’, ‘breath’ and ‘spirit’ are the same in many tongues, including the Hebrew ruach and the Arabic ruh. The Greek word for wind, anemos, is the root of the Latin anima, ‘soul’, the force that animates, or gives life, to breathing creatures: animals. Another Latin word, spirare, which means ‘to breathe’ or ‘to blow’, is the source of ‘spirit’ as well as ‘respiration’. And to the Greeks, in the words of writer and translator Xan Fielding, ‘breezes used to be called zoogonoi, life-begetters, and psychotrophoi, soul-nurturers; and the mythical ancestors of the human race who were worshipped in Athens  . . . were wind-spirits as well as ancestors, breaths as well as souls.’

I wanted to follow these breaths, these souls, but where to begin? In ancient times an aspiring wind-walker might have consulted an aeromancer or, even better, an austromancer, the former being a weather diviner, the latter specifically a wind diviner (from the Latin auster, ‘south’, suggesting an emphasis on powerful southerlies). Wind was rendered visible in clouds of dust or seeds thrown in the air, the blown patterns of which were interpreted like language; in sacred groves Hellenic seers made predictions from the percussion created by gongs struck by wands swinging in the breeze. Such blasphemous divinations were condemned by later Christians, and the science, or magic, of aeromancy was excoriated by the medieval theologian Albert of Cologne; though he may have confused it with necromancy, a far more sinister hobby.

Today our forecasts might be shaped with the aid of satellite images and fantastically complex computer models, but the assumption is the same: that the invisible patterns of wind can be interpreted to understand the future. From an aesthetic point of view the results are beautiful; to look at an online weather map is to see an ever evolving world of gorgeous psychedelic design, a shifting spectrum of purples, greens, yellows, blues and oranges, punctuated by the jabbing blue triangles and red half-hemispheres of cold fronts and warm fronts. Wind becomes a topography of dizzying, concentric whorls: the contours of isotachs and isobars – which represent lines of equal wind speed and atmospheric pressure – and wind-barbs, directional lines which branch at five-knot increments, swirling through the atmosphere like clusters of musical notes. They have the appearance of runes, illegible to those without knowledge to read them. They are a kind of alphabet, as wind is a kind of voice. 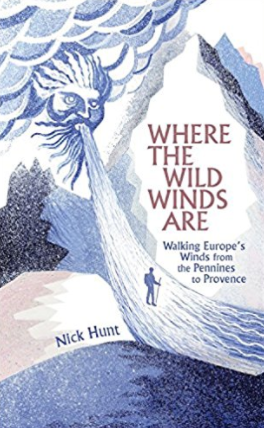 Where the Wild Winds Are (Nicholas Brealey, 2017) tells the story of a series of walks following Europe’s wind-ways: the Helm, Britain’s only named wind, which howls over Cross Fell in the Northern Pennines; the Bora, which freezes the western Balkans and the Adriatic coast; the Foehn, which brings warmth and clear skies but also headaches, insomnia, anxiety and depression to communities in the Alpine valleys of Switzerland; and the Mistral, the Provencal ‘wind of madness’ that animated and tormented Vincent Van Gogh.

The book is available to order online, or – much more preferably – to buy in all good bookshops.