Skip to content
Tom James
is a writer, self-publisher and artist. He ia currently producing a DIY guide to surviving and thriving in a future ravaged by climate change. and is part of Spacemakers, a utopian regeneration agency .
Share

Did you see that? That man on the bike? He was wearing too many clothes and a camping rucksack, with heavy pannier bags stuffed with sticks and rags. He was moving slowly through the traffic jam, ignoring the red lights.

Or there was the man on the patch of grass outside the DIY superstore, remember? He was dressed in a khaki t-shirt and walking shorts; he had his pack next to him and a flask of water, and he was perched on his knee like he was looking out into the valley below. Only he couldn’t have been, there were houses in front of him, buses and cars blocking the view. He only looked a few years older than us. His skin was bronzed from the sun.

Do you remember the woman on the high street, standing still, with a bag on wheels, and five spring onions in her out-stretched palm? She can’t have been selling those spring onions, can she? It must have been some sort of mistake.

There was the transit van driving slowly down the street, with its windows wound down, and one rubber-gloved hand extended out of the passenger-side window, ringing a small bell. No-one will tell you what this means.

There was the man fishing in the concrete channel in the middle of the city, next to the railway station. The man walking through the fields, through the waist high weeds of summer, in a boiler suit, with dark stains across his shoulders. The man in the hi-viz jacket, pushing a trolley full of scrap metal, old toasters, sewing machines around the streets where you live. The couple walking hand in hand along the canal, bow-saws swinging in the crooks of their arms.

If you’d seen one or two of these things, you wouldn’t think anything of it. But the more you see, the more you notice. And all of a sudden, you can’t go anywhere without seeing it. Always out of the corner of your eye, from a bus, in traffic. Always disappearing out of sight. No-one will admit it. No-one will talk about it. But suddenly, it’s all around us. Now, every time I open my eyes, I see the future.

I wrote the above text quite a long time ago. I started seeing these things when I lived in Sheffield, but they increased dramatically once I moved to London. Wherever you’re living, I’m sure you’ve seen them too. I was going to send the writing in to Dark Mountain, get it published, get it read. But on its own, that didn’t seem enough. The more I saw the shoeless old men, and the silent wastelands with traffic jams all around, and the foxes in the day time, the more I thought about what to do about it. Whether to try and stop it. How to start preparing. How to help.

In the end, I decided to create something that could try to help other people, once those visions came true. 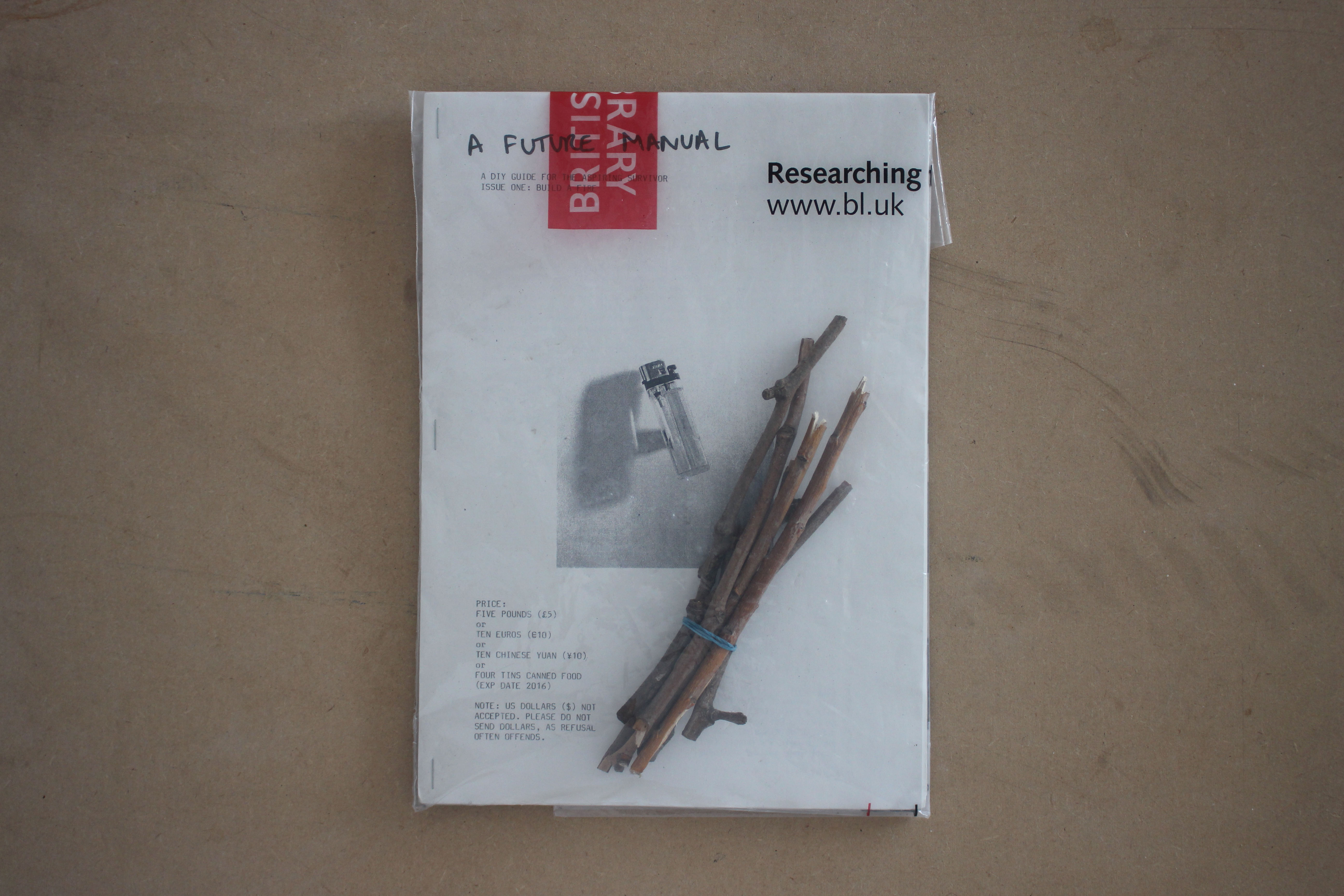 It’s called A Future Manual. It’s a DIY guide to surviving and thriving in the bitter, barren world we’re creating for ourselves and our children. It aims to teach you the skills you’ll need once the oil runs out, and the internet’s off, and the Big Sainsbury’s at the end of your road is knee-deep in flood-water.

Every issue aims to cover one thing, with full step-by-step instructions, diagrams and photographs (where technology allows). Issue one is about how to build a fire: from ignition to tinder to sourcing fuel. There’s also some more philosophical tit-bits, to help keep your spirits up. It comes packaged in a plastic bag, to keep it dry in the floods, and includes a free piece of kindling, to get you started. 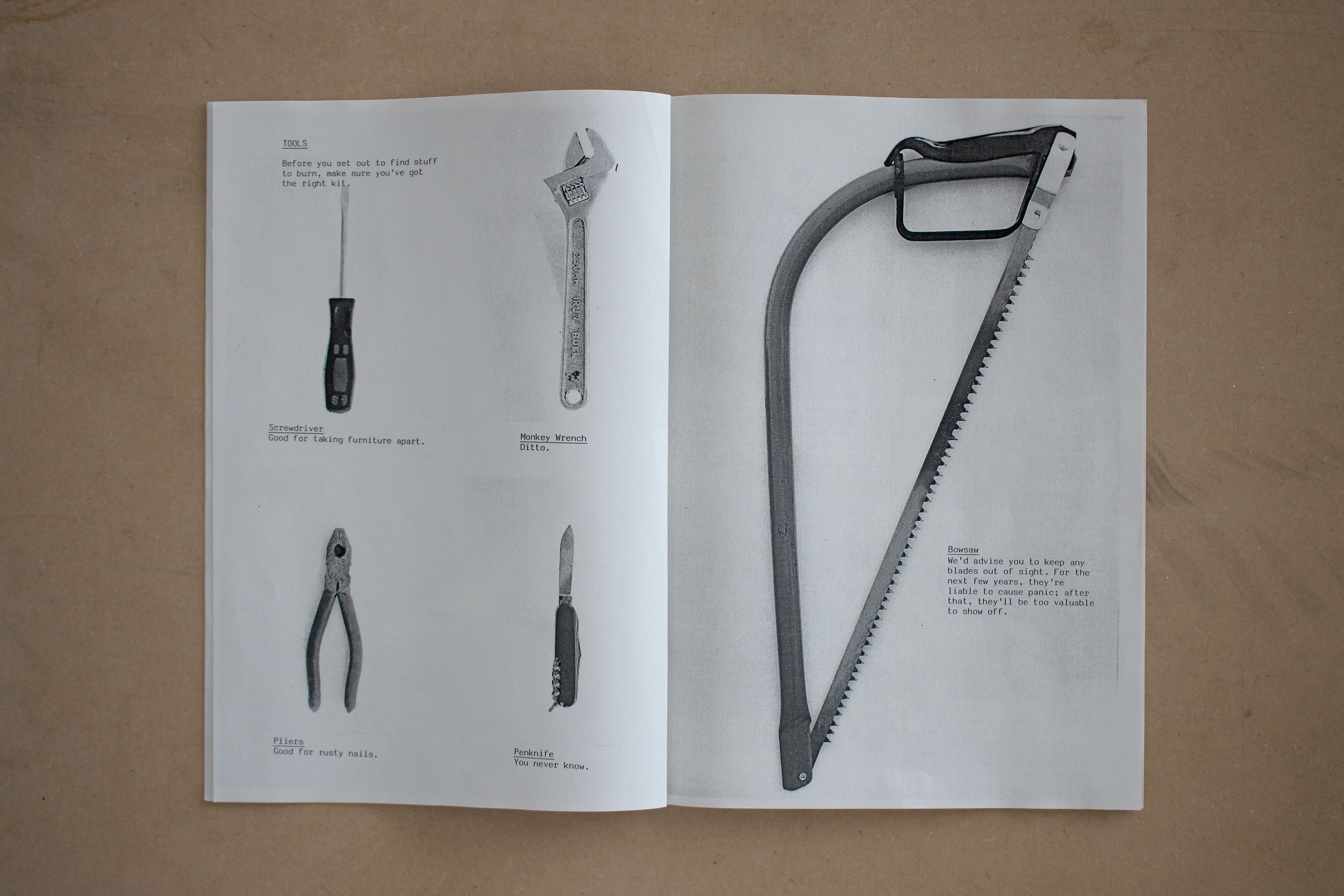 Is it serious? Is it a joke? This is the first question that everyone asks. To be honest, it’s half and half. I wanted to do something to reflect the weird position we’re in: where we know our cosy world is going to end soon, but don’t really know what we should be doing about it, or how to spend the time in between. What should you do to start preparing for a life without central heating and pyjamas and breakfast cereals? Start living in the woods? Get buff like those American guys on YouTube in camouflage? Throw away your phone and form a commune?

I think there’s something really interesting in all this. You can’t prepare for ‘the future’ in the same way that you can for a war or a hurricane, because ‘the future’, at least the one that most of us worry about, won’t be over any time soon. And today, right now, while most of us have full bellies and a roof over our heads, it always feels like you’re pretending, anyway. 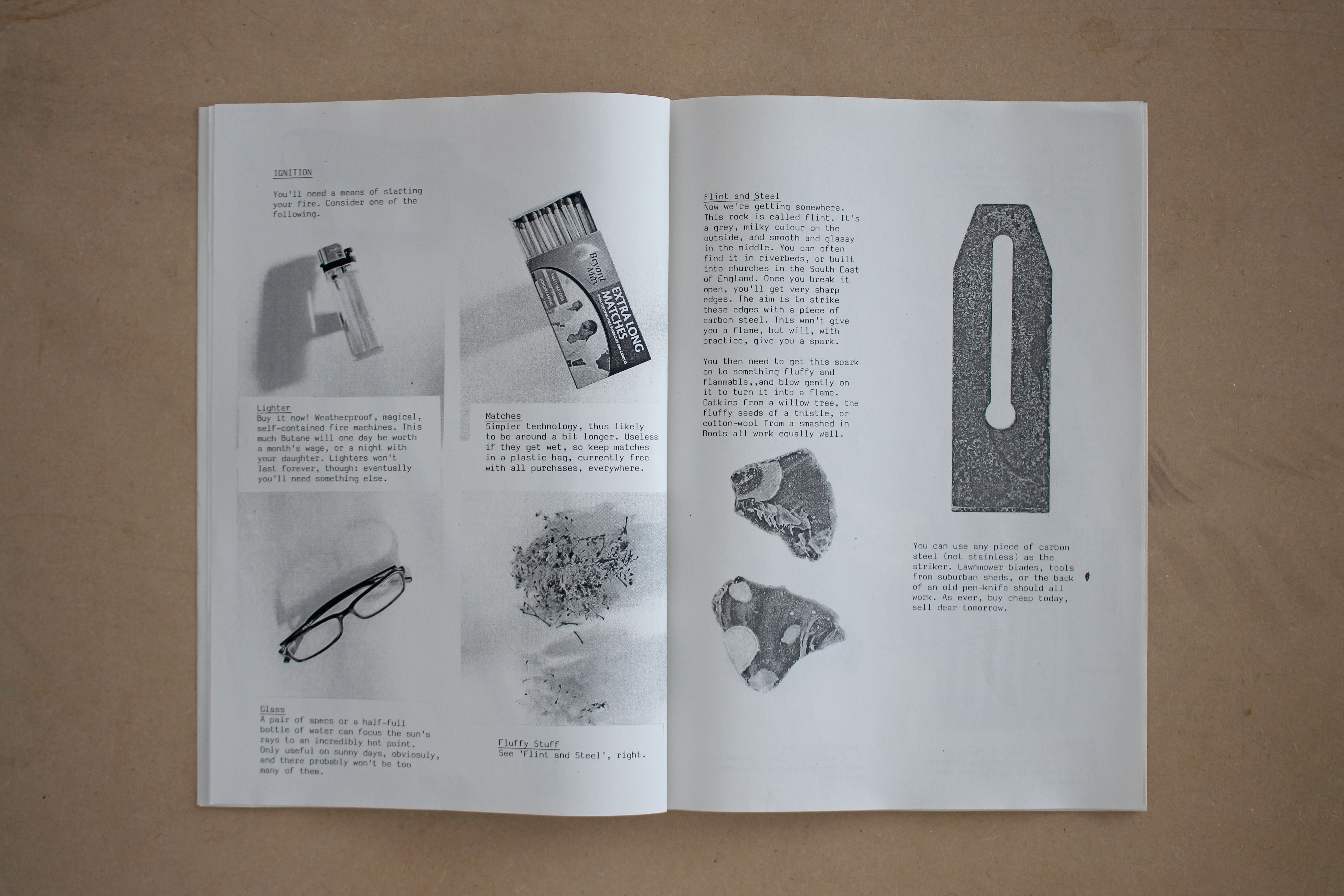 So hopefully A Future Manual reflects those contradictions. It’s half hopeful and half hopeless, half useful and half useless, half tragic, half comic. Because it is funny, at least a little bit, when we put our bananas in polystyrene boxes, and ship them across the world, and then don’t eat them anyway, and then throw those boxes back into holes in the ground. It’s funny in the same way Easter Island is funny, or the extinction of the Dodo. We’re a short-sighted species in an evolutionary cul-de-sac, blindly eating and spending our way to death. It’s a planetary sit-com.

It’s important that it looks right too. I thought of doing it on the internet, as you can reach billions more people that way (I’ve only photocopied 500, after all). But at the same time, it felt like it had to be something physical. Something that could still be produced once YouTube and WordPress and Google Maps are just a distant, magical, almost unimaginable memory. So this one’s printed on a typewriter, and photocopied. Long term I’d like to use things like letterpress, and get the copiers powered by solar, if that’s even possible: answers on a postcard, delivered by hand.

I’m not 100% sure about any of this. How to distribute it, how to write about it, what sort of tone it should be. Perhaps it would be better on YouTube? Perhaps it should be a PDF? Perhaps the time I spend learning to ride horses or jump start ambulances would be better spent campaigning for a 10% cut in carbon emissions, or a worldwide communist revolution, to End Growth Now? But the nice thing is that learning to start a fire with an old file and a piece of flint, or learning to grow a courgette from a seed, is actually an enjoyable thing to do in and of itself. It makes you feel connected. It makes you feel a little bit more capable. It makes you feel a little safer. 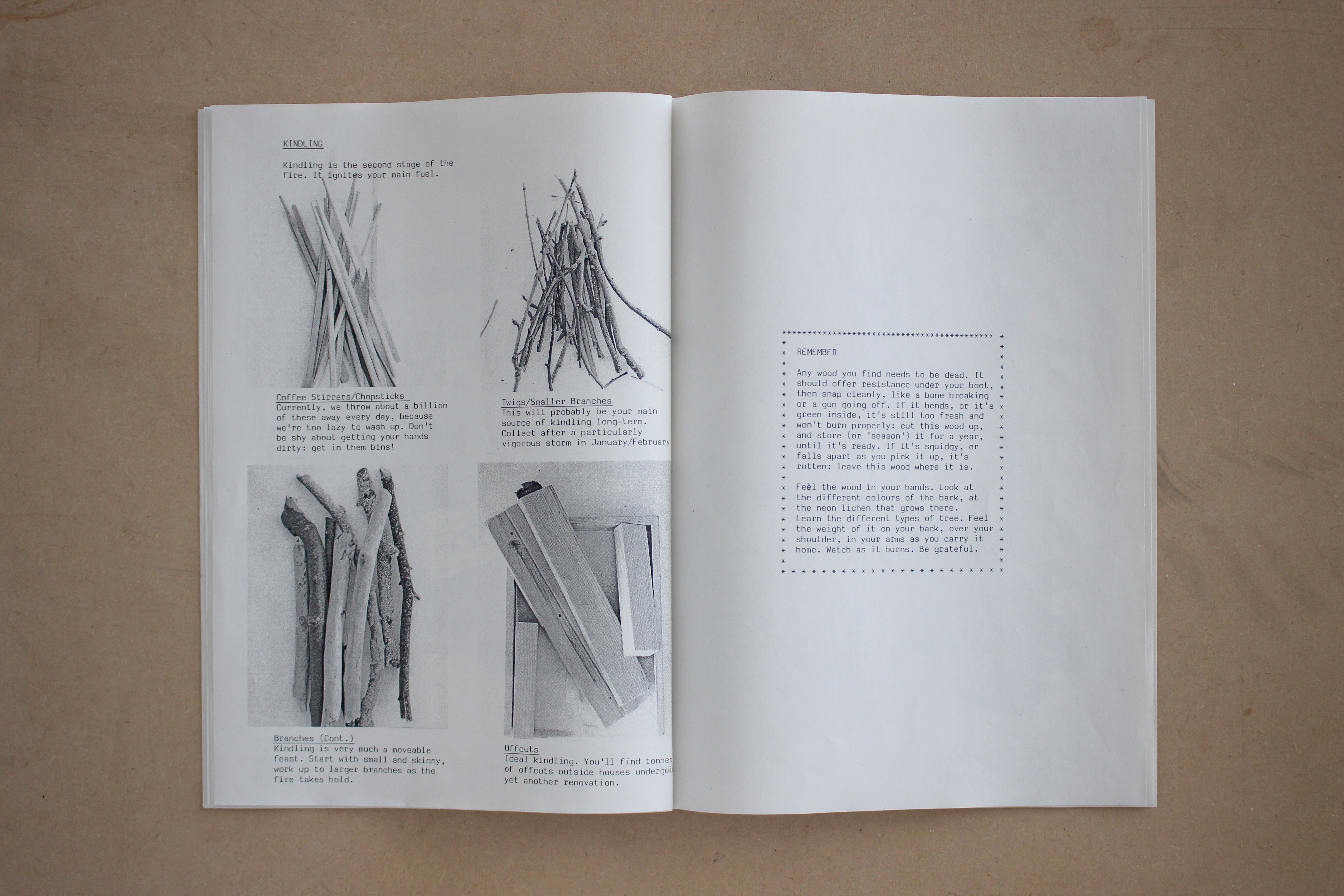 If you’d like a copy of A Future Manual, please send five pounds/ten euros in a well-concealed envelope to
A Future Manual,
239 Fordwych Road,
Cricklewood,
London,
NW2 3LY.

Or you can use PayPal on this website. Don’t worry mum, the website’s broken on purpose. I thought it would be funny.

Issue 2 (Ride a Horse) should be produced sometime in the summer. Thanks for reading. Noah says: build your own ark. 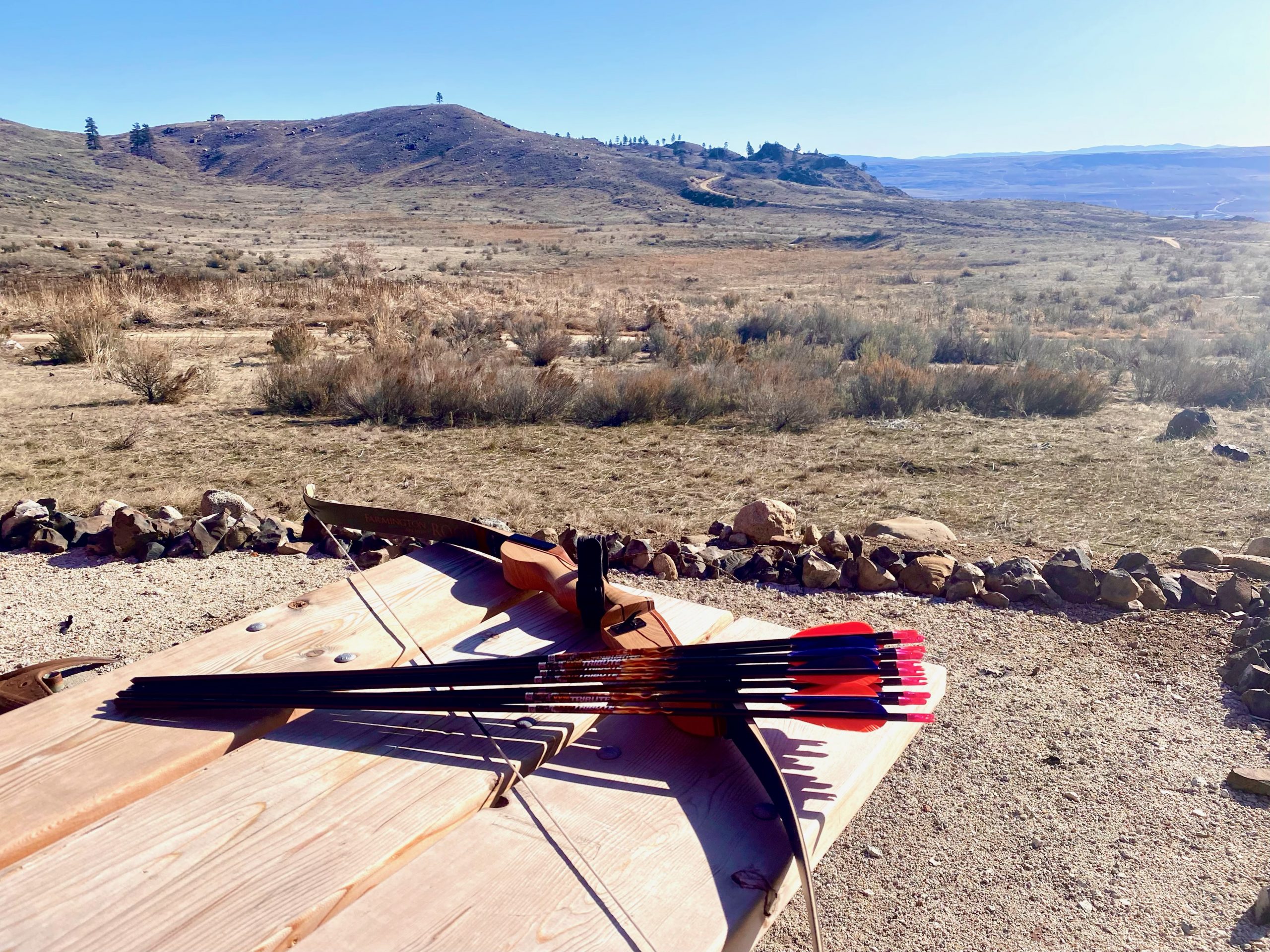 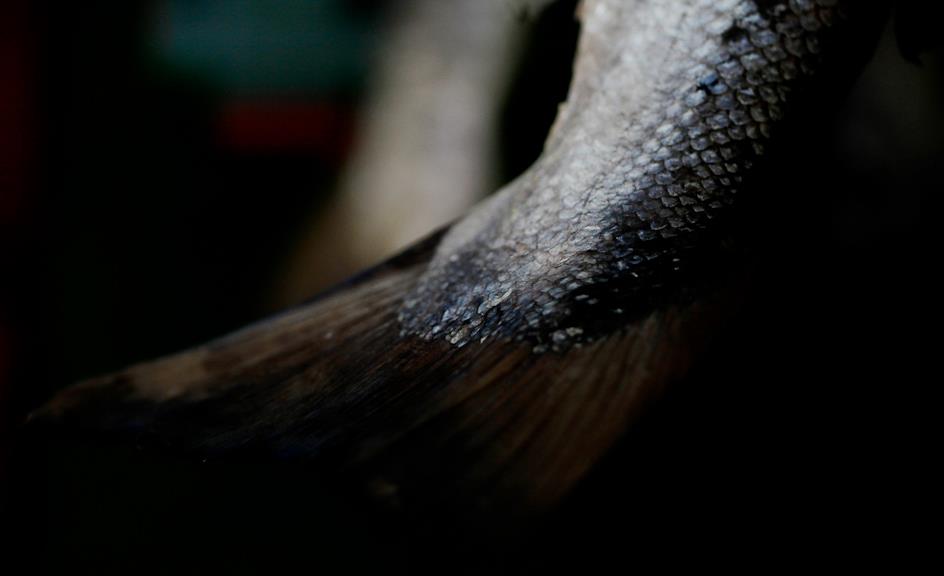 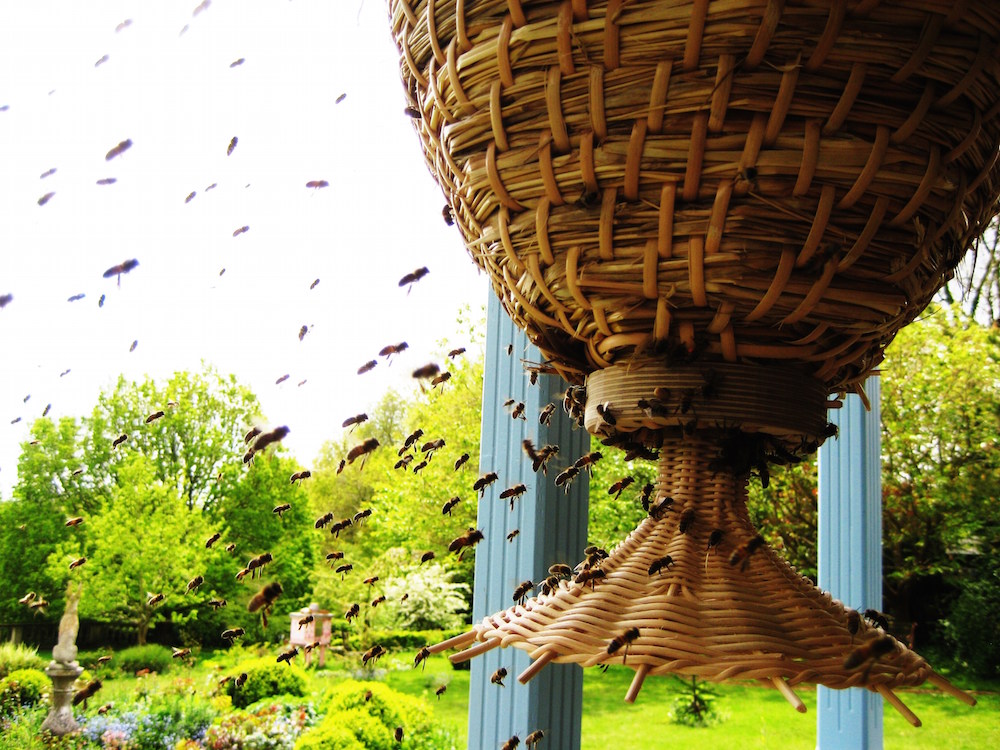