Skip to content
Nick Hunt
Nick is the author of three books about walking and Europe, the most recent of which is Outlandish, a work of gonzo ornithology, The Parakeeting of London, and a collection of short fiction, Loss Soup and Other Stories. He works as an editor and co-director for the Dark Mountain Project, and has contributed short stories and essays to many of its issues.
Share
‘Thank God for the crisis,’ said Big Ivan. We were eating tiny fried fish and drinking beer on the beach at Varna, the biggest city on Bulgaria’s Black Sea coast. ‘If the crisis hadn’t happened, there would be nothing left of our coastline.’

‘You will see it further south,’ said Vassil, the archaeologist who was letting me sleep on his sofa. ‘All these places used to be fishing villages – now they have merged together into a kind of summer metropolis. I think they are trying to create an entirely concrete coastline.’

For months in my imagination, the Black Sea had taken on a kind of talismanic status. Through the long white winter, crunching through snow, and then in the sweltering heat of summer down endless roads of yellow dust, I had pictured the moment of arrival – cresting one last green hill to gaze down on an empty beach,the sea gleaming out to the horizon, the almost unimaginable pleasure of cool, rolling water. Of course, it hadn’t been like that. Not many moments are. The night before I reached the coast I had camped in the woods above a small village, staying up late and feeding oak branches to a hungry fire. That place wasn’t quite what I’d imagined, either. The ‘lake’ that I’d seen on the map, and spent all day confidently walking to, turned out to be an artificial reservoir containing the poison-blue effluence of a PVC factory – I’d had to walk another couple of hours, through a confused landscape of industry and agriculture, as if, the closer it got to the sea, the less the land knew what to do with itself. But despite the disappointment of the lake and the monstrous attacks of mosquitoes, I felt thrilled to have got where I was. It was a good fire, and those were good woods. It was the night of the summer solstice, and the next day I would reach the Black Sea.

In the end, my first sight of the sea was strangely flat. I glimpsed it from a four-lane motorway on a towering concrete-legged bridge, a hazy band of blue beyond the cranes of Varna’s industrial port. Then it disappeared again behind streets of tall buildings, and I paced sweatily through the city determined not to let it get away, hurrying without much interest past a golden-domed cathedral, dwarf palm trees in municipal pots, a maze of pedestrianised shopping streets, mobile phone shops and ice-cream stands, pausing briefly to allow a woman to spray me with free perfume samples – I’d been camping for seven days, and thought this might mask my stench until I got in the water – past a row of stone columns, Greek or Roman, I didn’t care which, until at last I came to the sand, threw off my rucksack and my clothes, and stumbled into the water. I felt as if no-one else on that beach had more right to do so.

The water felt very, very good. That moment, at least, was everything I’d imagined it to be.

Three days later, I was off Vassil’s sofa and following the coastline south. I camped on beaches, my tent door open to feel the cool night breeze and hear the gentle shump of the waves. The cliffs and low hills I followed had a very ancient feeling – eroded slopes of broken rock and spiky, scrubby plantlife. I swam at every beach I came to, replacing the sweat on my body with salt, and often saw no-one but cormorants and gulls, cows huddled in the shade of trees, and occasional little clusters of nudists nodding hello politely.

And then, I reached the ‘development.’ I’d been expecting it. On the far side of one last, wild cape sat a white hotel as big as a cruise ship, marking the beginning of what I knew would be tourist hell. ‘Sunny Beach’ seems an unlikely name to dread, but this is what lay ahead of me – Bulgaria’s original, ur-resort, from which everything else had spread after the Transition.

The Transition is what Bulgarians call the change from communism to capitalism in 1989. Several weeks before, in the mountains, I’d been told stories about these times by a young film producer. He explained how the communists saw the change coming, and started moving money out of the country before the Iron Curtain collapsed. The wealth was hidden in foreign banks, and after four or five years it started trickling back into the country in the form of private investment. Much was placed in the hands of the mutri – swaggering, nouveau riche wheeler-dealers of the big-necked, shiny-suited type, who had the advantage of being new faces, unassociated with the old regime.

In the cowboy years of the 90s, with the country suddenly up for grabs, their power was unassailable – he told me a popular anecdote of how they parked in the middle of the road, causing chaotic traffic jams, and then sat back sipping cappuccinos, just to show they could. This attitude, he suggested, had filtered down through society – people saw them getting away with murder, and tried to emulate it. The result, coming after fifty years of the government telling everyone not to think, was a lack of civil society – and, when the construction boom came around in the 2000s, an unregulated free-for-all on the Black Sea coast. 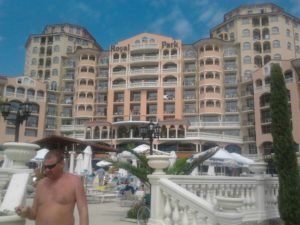 I walked with the consequence of this for much of the next two days. Hotel after hotel after hotel after hotel, a seemingly never-ending repetition of balconies and balconies, looming over jam-packed beaches where the oiled and the glistening sprawled under corporate-branded parasols whose shade you had to pay for. Inland it was even worse. Casinos, sports bars, fitness centres, bingo halls, discos, all-day English breakfasts, souvenir stalls, beachwear shops, arcades, restaurants, swimming pools as luridly blue as the chemical lake I didn’t sleep by – interrupted, occasionally, by small plots of beach grass and weeds surrounded by fences and For Sale signs, condemned land waiting sadly for its turn.

This was the ‘summer metropolis’ Vassil had spoken of. The conjoined resorts of Elenite, Robinson, Sveti Vlas, Sunny Beach, Nesebar – actually an ancient peninsula city reached by a narrow causeway, which, due to its unfortunate location, has been turned into a cute little toy town – stretching as far as I could see, a self-replicating architectural virus. ‘Thank God for the crisis,’ Big Ivan had said. ‘If the crisis hadn’t happened, there would be nothing left…’ The Bulgarian government is currently proposing a change in the law to open up the rest of the country – not only its remaining beaches, but the mountains and forests as well – to further tourist ‘development,’ which will destroy even more of wildness and beauty. As far as I was concerned, this was crisis – and if economic collapse is what it takes to stop it spreading even further, then I hope it continues. Perhaps one crisis can cancel out the other.

I wandered inadvertently into an all-inclusive resort. Everyone apart from me was wearing coloured plastic wristbands to demonstrate their allegiance to a particular package deal, like some form of indentured servitude. The broiled bodies on the beach didn’t look particularly happy – in fact most of them had the frowns and down-turned mouths of deep dissatisfaction, as if they didn’t quite know why they’d come here or what they were meant to be doing. I stood in horrified fascination watching fifty people performing a synchronised high-energy dance routine led by a grinning, whooping girl in lycra, until a security guard arrived to escort me off the premises. I guess he noticed my bare wrists, and he was actually quite reasonable – we both knew that I didn’t belong there.