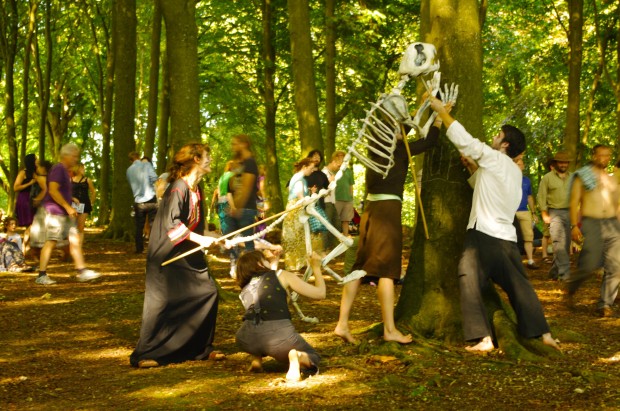 Funeral for Lost Species, Feral Theatre, Uncivilisation Festival 2012 (photo: Bridget Bridget McKenzie)
Bridget McKenzie
is a researcher and creative curator working across culture, environment and public engagement. She has been director of Flow Associates since 2006 She is a trustee for ONCA Gallery, a key initiator of Culture Declares Emergency and founder of an emerging museum, Climate Museum UK.
Share
The ethical ecologist Marc Bekoff says that ‘Play is training for the unexpected’. As we face a time of critical uncertainty, play is undoubtedly the best training.

But there are questions. How do we manage our grief at ecological loss? How much should we involve children in this grieving? Will they manage their grief if they do it their own way or should we protect them from knowing it all? What can we learn from children’s ‘sad play’? Will they lead us beyond our current ‘space between stories’?

Why am I thinking about this? It’s International Remembrance Day for Lost Species on 30th November. The initiators are Uncivilisation attendees Persephone Pearl and Andreas Kornevall, as well as Vanessa Vine. (I’m also involved this year by including it in Treeage, a week of creative actions for trees.) There will be poems, songs, stories and other forms of litany of loss for the many pristine habitats and non-human beings we will no longer see. Some people are asking ‘why do this? Surely we should be taking action instead?’

To convey the event’s purpose, Vanessa quoted Stephen Jenkinson on how grief is the twin of a joy for life, and therefore essential: ‘From a young age we see around us that grief is mostly an affliction, a misery that intrudes into the life we deserve, a rupture of the natural order of things … What if grief is a skill, in the same way that love is a skill, something that must be learned and cultivated and taught? What if grief is the natural order of things, a way of loving life anyway?’

There is much to grieve for. I’m writing this in yet another pre-dawn insomniac anxiety fit, having read a study about a critical state shift in c.2045 that will prevent the planet from supporting life as we know it. Many people share my insomnia. Drew Dellinger, who made this filmpoem, wakes at 3.30 am because his great great grandchildren won’t let him sleep. They’re asking ‘What did you do once you knew the planet was being plundered?’ My daughter commented drily, ‘Yeah, so what did HE do? He just made that video!’

What can you do?

Sitting here in the dark before she wakes, I worry that my daughter will read these terrifying statistics or hear me talk of them. She has already heard some of it, of course. She has responded in part by carrying on her life as joyfully and creatively as she can. But she also weaves some sadness at biodiversity loss into her art work. For example, she co-invented the Unextinction Machine – an art project where she collaborated with her dad to generate new animals to combat extinction losses. The animals are just imagined, so in some way it’s not going to directly tackle the problem. It is only play. But it was an oblique strategy that raised our spirits and awareness, and it also led us to take practical actions for wildlife.

It is only play, but play is not only. What is play then? Its opposite is repression and fixity. Play does involve rehearsal and imitation but comes with freedom to change yourself and to generate novelty. Playful learning is inherently complex and edgy, pushing you on a trajectory towards becoming fully human, which means more fully interacting with the world. Healthy playful learning involves grief, when you disturb yourself to points of horror (by taking risks in games or by approaching harsh truths obliquely) then cycling back to places of comfort or denial. You have to repeat this process. Prolonged and free playful learning allows you to gradually assimilate those unpalatable truths or to cope with risky tasks.

So, I think it’s right that children should be free to play and make art about big tragic issues, but I also worry that the knowledge of what is to come is just too tragic. On the other hand, I don’t want to see knowledge repressed. I think as adults we become suckers for stories that miss the target of the real reasons for our grief, and we harden the split in ourselves between the horror and the denial. This leads to a benign orthodoxy where we agree that we mustn’t speak too much truth because alarming people, especially children, about the future causes negative reactions. It’s an intractable problem, this balance between comfort and knowledge.

David Bond knew he had to do something for the sake of the children, so he assigned himself Marketing Director for Nature and set up Project Wild Thing. This is a new campaign using creative media to get children playing outdoors in green spaces, in touch with their inherent wildness. A film is linked to pledges and games that motivate adults and children to have green time. The film is getting well circulated and should be effective because it is a well-crafted narrative, compelling and light-hearted. It is hard to disagree: of course children belong in nature. We know it from our own experience.

But I have questions too. So much more needs to be done to restore children to their birthright to a thriving planet. There is the issue of time. We can’t teach children in abstract ways to be better Earth stewards and sit waiting in the hope that they succeed where we failed.

What can we do?

Jay Griffiths has written an impassioned analysis of the crisis for children in Kith: The Riddle of the Childscape. A key message of this is that children are chronically estranged from their ‘kith’, denied freedom to grow through full connection with a favourable place (or oikeios, the Greek origin of the word ecology). This book provides an anthropological foundation for grasping the crisis, on which we could build a comprehensive and systemic plan for children. At the same time, a big part of ‘what must be done’ is expressing sadness for what is lost. Jay is often criticized for her emotional prose, which keens most about the restricted freedoms and losses of wild beings. This criticism arises from our split-ego culture that is so uncomfortable with personalised, informal and open-ended expressions of grief. Free-range sadness is mostly banished from designed play and learning because adults assume it is not safe and that children won’t like it. Perhaps too, we adults fear that children exploring sadness would open up too much reason for grief in ourselves.

Bayo Akomolafe has published a rousing speech on The Deep Shift We Need for a New Planetary Future. He opens with a reflection on the recent birth of his first child. His ecstasy about being a father contrasts with a tendency amongst some young adults now to reject procreation – because they can’t afford it, are concerned about overpopulation or don’t want to bring children into a doomed world.

Bayo feels that ‘children enchant the world. They are the prime reason why I still find it possible to believe that the universe has not given up on us. They bring hope and light and play to our otherwise bland existences.’ He also knows that ‘there is a depth and sternness to their play … They are heralds of hard questions and difficult considerations.’ He outlines his argument that most do-good initiatives are just sticking plasters, that we need a deep shift based on connectivity. We must turn to each other. He returns to the theme of children, explaining how they teach us: ‘I suspect that our children bear a crucial message for us in these transitory moments … in learning to be with them we not only find clues about the new world now demanding our attention, we find wisdom for catalyzing her emergence.’

So, if children teach us how to be wild, free and connected, then we must allow children to be so and must model this ourselves as adults. I see this as a feminising shift. Some may say this sounds too undisciplined and soft but I think this essential shift in adult behaviour towards intimacy and expressiveness is tough to enact and does not mean abdicating responsibility. Simone de Beauvoir argued that our patriarchal leaders are like children, and that in inheriting or accepting patriarchal power we also become infantile. Our leaders have gamified their competitive and corrupt power, in the form of the Global Race, and expect us to play this big game. But when do we ever hear any expressions of sorrow or honour for the losers in the game? This is not a good game. We need games and stories in which we can be wild and free, and sad and connected.

Paul Shepard in his essay ‘Nature and Madness’ diagnosed the environmental malaise as one of adult infantilism, due to a lack of ceremonial initiation into the natural world. Education focuses too much on making the world (which means destroying and then remaking) and not enough on loving the world as the ground of our being. In a less infantilising society the emerging adult ‘will not study [nature] in order to transform its livingness into mere objects that represent his ego, but as a poem, numinous, and analogical of human society’.

So, we can but try to involve children in serious rites of passage. As Persephone says ‘making events like Remembrance Day that are eclectic, seemingly eccentric, sometimes playful, is part of a bigger task of finding inclusive, accessible, beautiful ways of looking at and talking about difficult things, and most importantly mark a commitment to explore the realm of rites here and now – to try to re-find or invent a language of praise, connection and memory and to share that with our children’.