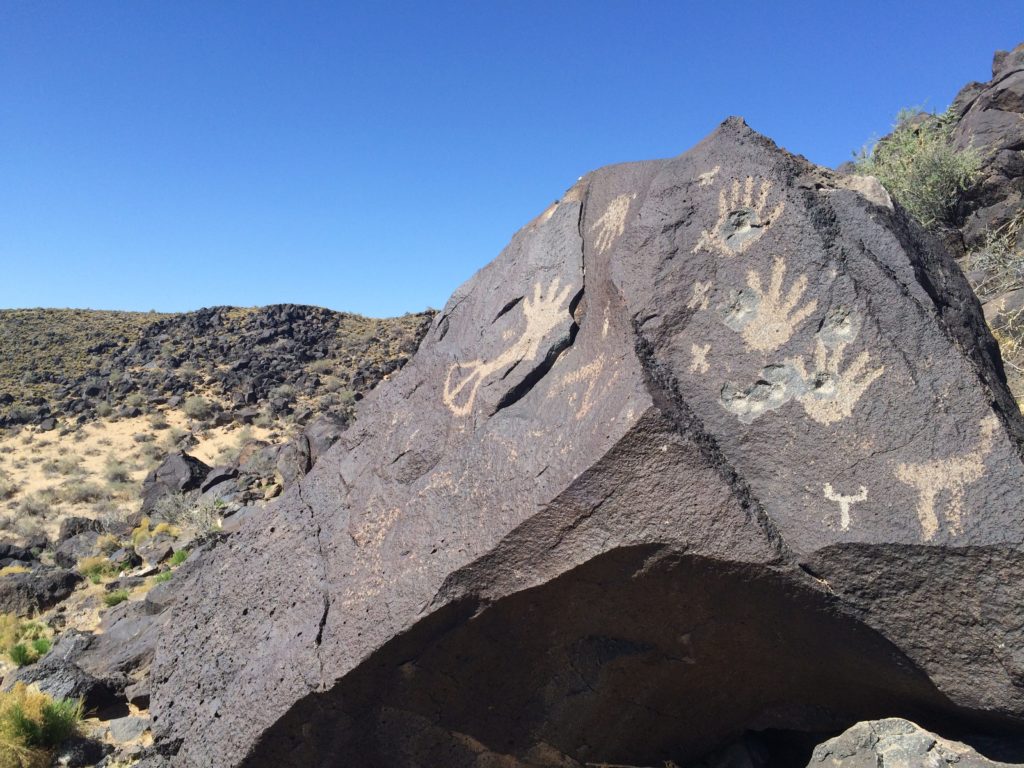 Kim Schnuelle
has spent time as a horse trainer, palaeontology student, marine biologist, coroner's assistant, shop clerk, and family law attorney. She lives in Seattle, Washington State with her husband and their Texas stray hounds Chucho and St. Lucia. Her work has also appeared in Canary Literary Journal, Unpsychology Magazine, Seattle's Gallery 110, and several local Washington State legal publications.
Share
The housing development was called Las Marcadas – The Marked. It sat in a flat plain, firm and abutting against the low hills to the northwest. A nondescript beige sign announced the cul-de-sac entrance in large fonts, overshadowing the smaller National Monument placard pointing north. I parked my rental car and checked my watch.

I was in Albuquerque killing time until my afternoon flight. I don’t know if you’ve even been there but on a late winter’s Sunday there are a million better places to be. The baked brown/grey streets are mostly devoid of life and the air smells of windy sadness. I had asked the hotel clerk how far I could drive away from any of this and still make my 5:00 flight. He suggested Petroglyphs National Monument. OK. That was the plan then.

The drive up to the park headquarters took me through streets of shuttered ‘Big! Lots!’ stores and drooping attempts at suburban gardens. It was all near deserted, save grim-faced pickup drivers and shambling woozy alcoholics, swaying still from the night before. I turned on the radio and sang along to Spanish advertising jingles.

When I pulled up, the ranger was jarringly helpful. Full of caffeine and shimmering dental veneers. I gave him my flight time and asked what I could do in the time I had. He launched into a cavalcade of the myriad tourist possibilities this little corner of New Mexico, Land of Enchantment, offered. He showed me the very many local postcards on display, each with a ‘beautiful view to send the folks at home.’ He was friendly and kind but I was grumpy and already deeply soured of humanity by 10am. I forced a smile and picked a trail at random. Piedras Marcadas. Located in a ‘lightly travelled’ part of the park twenty miles to the northeast.

And now here I was. Mindful of the ‘please secure your possessions/this is an urban park’ warnings, I pulled my coat over my travel bags and locked the car.

The trail skirted Las Marcadas to the north, allowing a glimpse into half-hearted xeriscape backyards and yellow plastic toys strewn as afterthoughts on concrete patios. A large dog was baying in the distance. Wind-dried Walmart bags were tangled in the sage brambles. I hiked up the sandy wash of a path, nodding at passing teen joggers, and headed to the foothills. I could see tracks of jackrabbits and coyote, sharp and recent, in the loosely packed dust. I looked down and kept walking.

It was not long before I saw marks. There – on the high rock to the right – was a handprint. Above was a spiral and what seemed to be a spaceman. A curious looking bird and a snake straight as a wizard’s staff.

The marks were chock-a-block and were tumbled down the hills. There were hundreds cascading down the slopes. Not in obvious places though. Climbing was required.

There is a body-memory delight in clambering up a rocky hill. In scaling boulders looking for petroglyphs. Time becomes fluid and then just slips out of its everyday parameters. I forgot everything else and focused on the ground and rock faces in front of me. But as I scrambled over the land I noticed other marks as well. The graffiti left by modern travelers. Some was of the ‘Trevor loves Mary’ or the ‘Jesus is my saviour’ type. But most was far more subtle. A scratched antelope, like the older running ungulate to the side, only this one just a few years old. A star-scape, fine grained as if pecked by a screwdriver. A man-ghost. 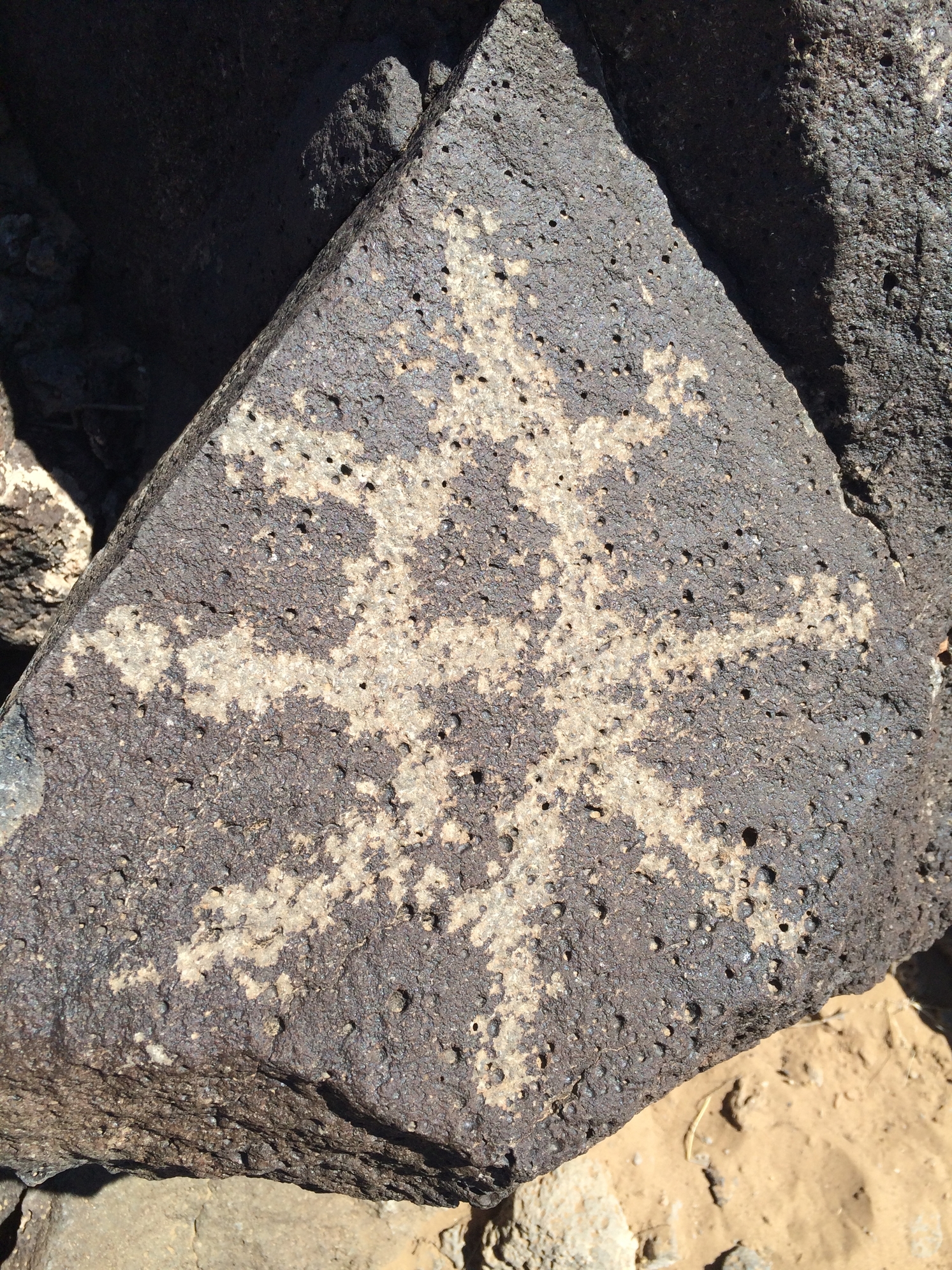 Unlike the scribbled names of passing vandals, these other marks blended in with the landscape. From a distance, last year’s man with a spear could be a centuries-old shaman. These cuts and scrapes left the carver anonymous – his or her own memory of the work as the only testament to their presence. All tracks of their lives here, in suburban New Mexico and three blocks from the nearest Starbucks, erased from view. Instead, what was etched into the so very black surface was more of a longing than of any specific figure. Not an antelope but rather a conduit. A pull to belong to an older community of the land. Back when it was an untamed and unpaved place. Back when it was a place beyond the illusion of modern control and containment.

Vandalism is a scourge throughout our American wild land. Petroglyph National Monument, from all accounts, fares worse than most places. Possibly due to its urban setting alone. Just a few years back someone plastered gold spray paint graffiti inside a sacred cave several miles away in Boca Negro Arroyo. The selfishness and narcissism of these acts is rightly condemned. But what is this other graffiti? This ancestral mimicry? Is it something else? Rather than a shout that ‘I exist – Look at me now,’ it is more of a diminishment. A shrinking of the carvers themselves into the curve of historical time. A dissolution of their present self in exchange for a more primitive connection. A cry for belonging.

It’s a horrible thing too of course. A willful obliteration of the irreplaceable sacred. A violent intrusion into what should remain mythos. Yet a melancholy wind, a grey miasma, surrounds this destruction. It is the same sort of pathos that names a burnt-tan and repetitive housing development Las Marcadas. And maybe it is the same sadness that pulled me out from downtown that Sunday morning to stare at 500-year-old pecks and scratches as well.

A couple from Minnesota walked by. They were seeing the National Parks on a retirement dream trip, and we commiserated about the vandalism. Our words were full of ‘What a shame’ and ‘How could they?’ But my heart wasn’t fully in it. For really, who would not want, in their heart of hearts, to leave the paved and banal American Dream for the wide vistas from half a millennia ago? With less sense of the sacred, and less fear of looming arrest too, would I do the same? No I wouldn’t. But how can I really judge? The same longing resides within me as well.

I was out of time in this place. We all were. The tourists from Minnesota and the vandals from last season as well. I caught my flight and awoke the next morning in the rain-splattered green valleys of my Northwest home, thinking I’d been in a dream for those few hours. I looked at my photos to make sure the memory was real and then filed them away.

Now, over a year later, I’ve forgotten much of that trip. Forgotten the tourist shops of Santa Fe and the recommended posole and tamal cafes. Only the question really remains. Were these vandals seeking something more than defacement? Were they seeking a dissolution of their concrete, paycheck on Friday lives into the surrounding land? And aren’t I seeking that as well? 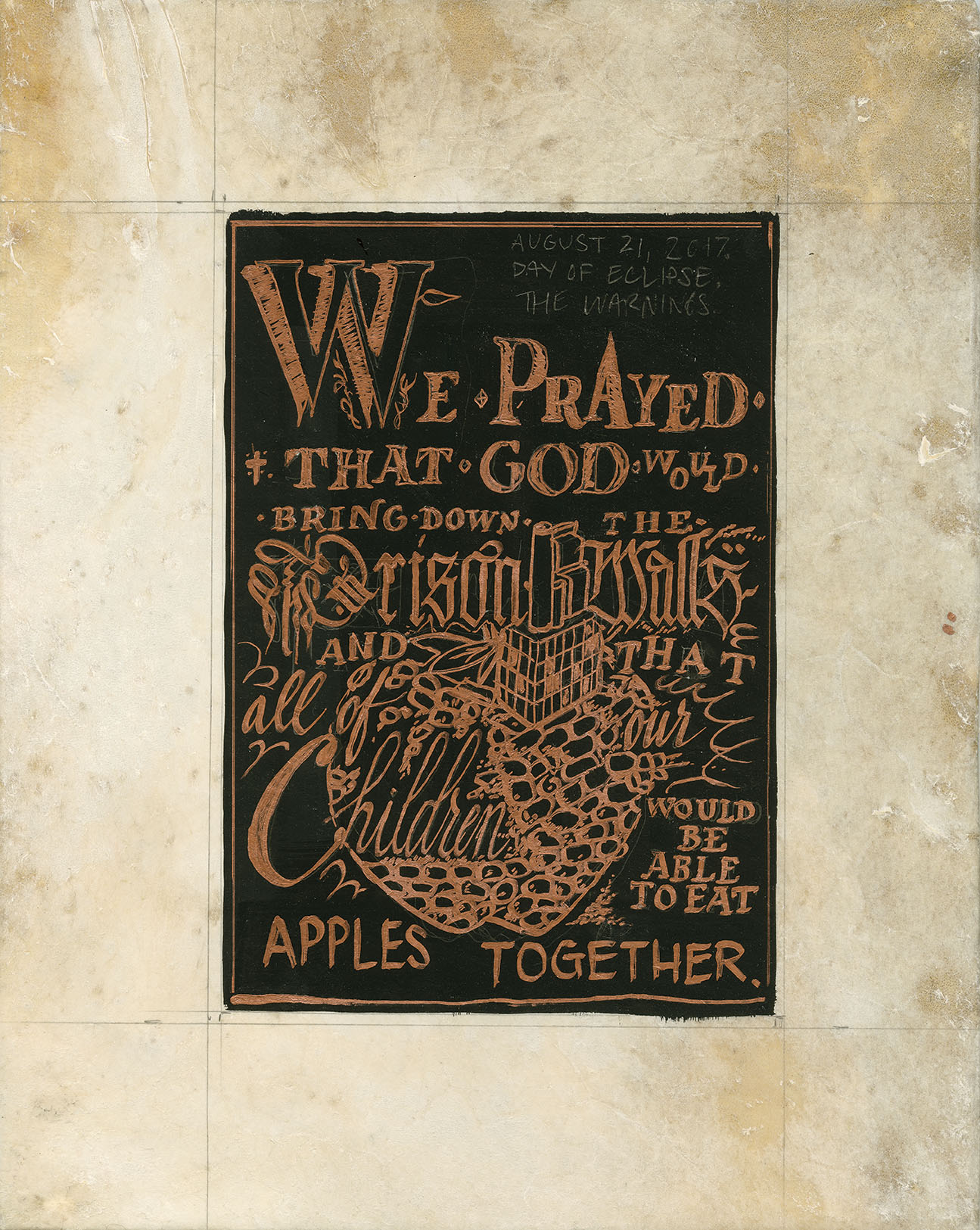 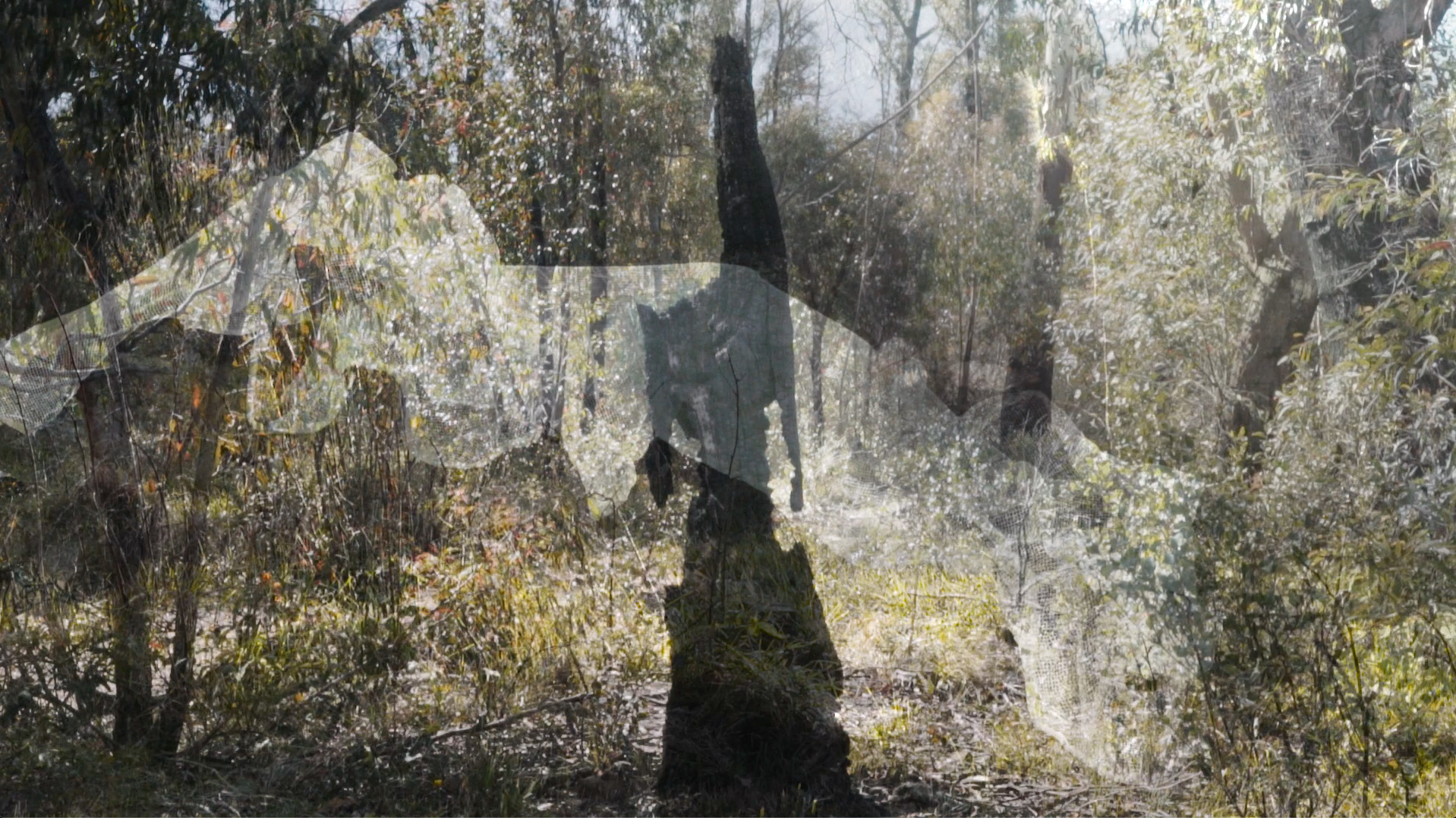 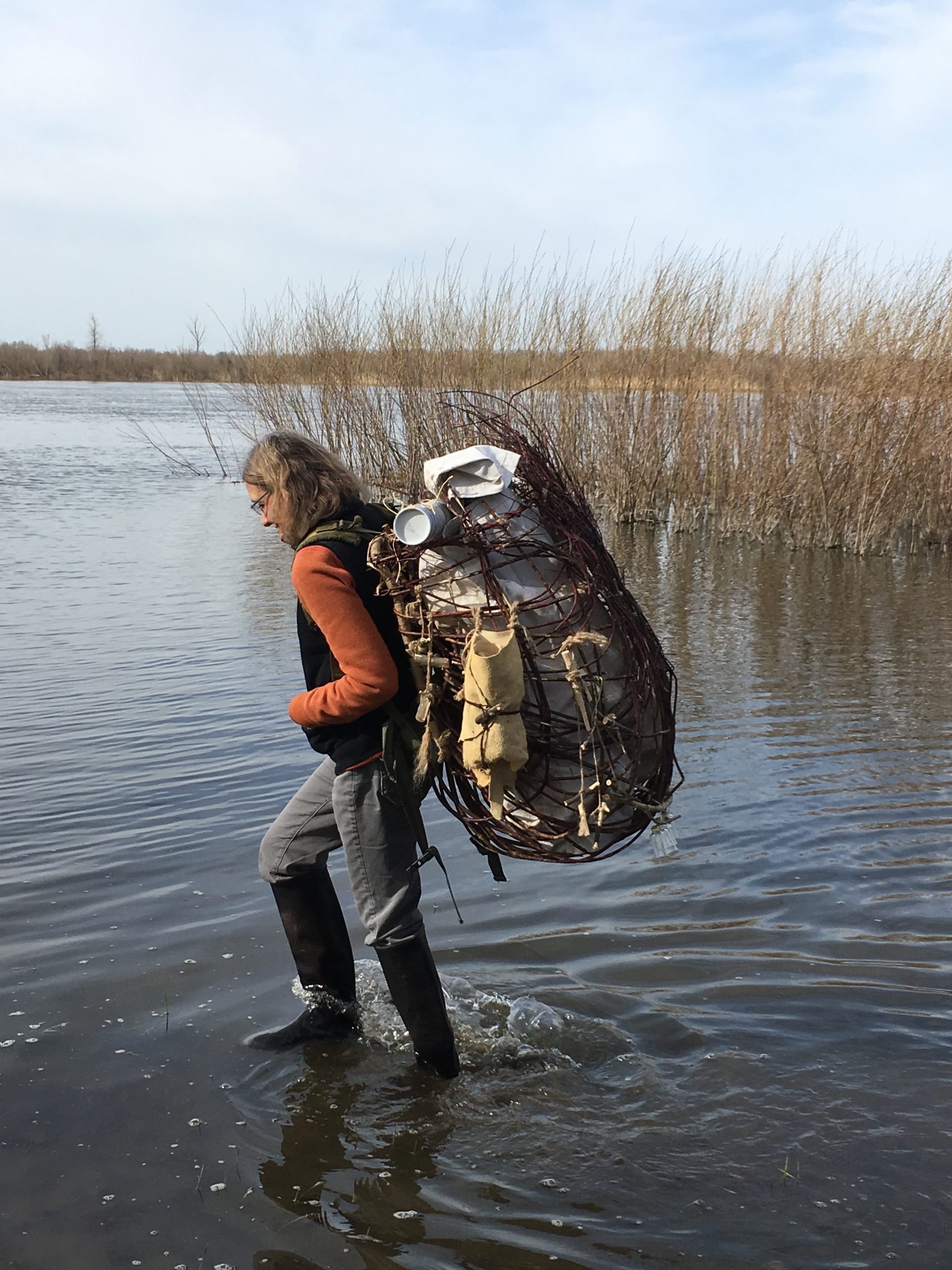